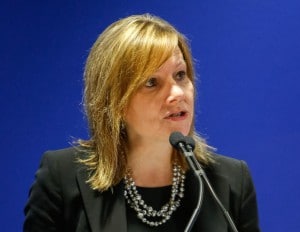 Those two words may best summarize General Motors response to Sergio Marchionne’s ongoing merger proposals, even as the Fiat Chrysler chief executive officer moves to enlist outside investors to support the proposed tie up between the two auto giants.

Mary Barra, GM’s chief executive officer, confirmed publicly for the first time during GM’s annual shareholder meeting today that GM had received an email for Marchionne in which he proposed a merger.

“There was an email that was thoroughly vetted by management and by the board. We’re going to sell more than 10 million vehicles across the globe. We have scale. We want to do what’s right for our shareholders. That’s our focus,” said Barra. 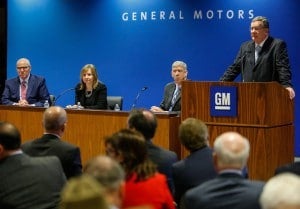 GM’s expectation of selling more than 10 million vehicles this year means it doesn’t need a partner, such as FCA, Barra said, noting it already enjoys a significant purchasing advantage on parts and commodities that it spreads out engineering and development costs over a large number of vehicles.

“We’ve had a merger with ourselves in the past couple of years,” Barra told reporters. “We have scale. We’re in the top tier.”

Aside from the fact that GM already enjoys a significant advantage on costs, the automaker is already involved in several partnerships with other automakers. It works with Ford Motor Co. on the development of new transmissions. GM and Honda have a venture dedicated to development of fuel cells. In China, it has a broad alliance with SAIC, one of China’s largest automotive companies, Barra noted.

Marchionne isn’t easily deterred though. The Wall Street Journal reported Tuesday that FCA’s Marchionne is now trying to enlist hedge funds to help put more pressure on GM to consider the possibility of a merger with its smaller rival.

“We are very much focused on our General Motors shareholders. We have a plan and it’s in the best interest of GM shareholders and that’s my focus,” she said. “GM has a solid plan to deliver value to shareholders.”

GM’s margins have improved for the past four years and GM also is continuing to improve its internal process and procedures worldwide, she added.

Since the first of the year, GM also has raised its quarterly dividend by 20% to 36 cents per share and approved a $5 billion share buyback to satisfy restless hedge fund managers, who were pressing the company to bolster returns to shareholders, Barra said.

Barra said GM has learned valuable lessons from the ignition switch scandal, which has been connected to the deaths of 111 motorists operating GM vehicles and billions of dollars in additional costs for the company. “We are a much stronger, better company for it,” added Barra.

(Click Here for details about Marchionne’s overture to GM.)

“We made substantial progress,” said Barra, who said the goal is to develop a “zero-defect” culture within GM.

“We continue to see margin growth and return on invested capital,” said Barra, who said one of GM’s key objectives is to produce a profit margin of 10% or better even as it invests in new vehicles and futuristic technology such as autonomous vehicles. “Our financial performance in 2014 was encouraging,” she said.

“We’re focused on earning customers for life. Really listening to customers,” Barra said. “We’re going to continue to try and understand the customer. We’re also insuring that you have an exceptional ownership. The bar for success is set very high,” she said.

(To see more about GM’s sales in China slowing down, Click Here.)

Barra said GM wants to earn recognition for GM as an industry leader in areas such as safety and technology, including the development of new powertrains.