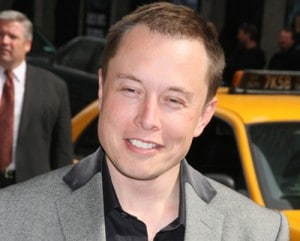 Tesla founder Elon Musk has reason to smile: the Model X is expected to hit the road in the third quarter.

Tesla founder Elon Musk offered up only optimism even as the company reported an adjusted $45 million loss, or 36 cents a share, during the company’s first-quarter earnings call.

While the company lost money, it’s adjusted revenue came in at $1.1 billion, which is the first time the company topped that number in a quarter. Tesla’s results were better than expected by analysts, which had a consensus estimate of $1.05 billion in adjusted revenue and an adjusted loss of 49 cents per share. Additionally, Tesla delivered 10,040 cars during the period – also a first.

“I’m feeling pretty good about things,” Musk said during a conference call with analysts. The maker expects to produce more than 12,000 vehicles this quarter.

The Palo Alto, California-based EV maker reported orders for the Model S were up in North America and Europe, but China continues to lag expectations. Tesla reiterated it expects to sell 55,000 Model S sedans and Model X SUVs this year.

Counting the oft-delayed Model X as part of the production mix this year was welcome news for investors. Musk said the company is building and testing prototypes now. Consumers will be able to order Model X’s in July, Musk said, and Tesla should begin delivering them at the end of the third quarter.

“We want to iron everything out, make sure it’s good, and then deliver at high volume,” said Musk, adding that he hopes to reveal a prototype of the Model 3, which is expected to be the maker’s entry-level model, next March.

“The Model X needs to go on sale soon and have no major issues during its launch,” said Karl Brauer, Kelley Blue Book Insights senior director. “Any further Model X delays will reflect poorly on Tesla, though getting it to market is only half the battle.

“Interest will be huge initially, reflecting the current market’s hunger for all things SUV, but if something derails the Model X’s rollout and keeps Tesla from taking full advantage of the hype and pent-up demand it will be a missed opportunity to generate substantial revenue in a short period.”

The company is confident enough in its growth to continue expanding. Its gigafactory that will produce not only batteries for vehicles, but also for homes and commercial buildings has garnered a lot of attention; however, the company also quietly acquired a stamping company, Riviera Tool, based in Grand Rapids, Michigan.

The 100-employee company supplies Tesla with stampings for its production facility in Fremont, California. Tesla is expected to keep the current workers and eventually rename the operation Tesla Tool & Die, according to the Detroit Free Press. The plant also supplies parts to other automakers, which is also expected to continue.

The gigafactory has been in the news lately with the Musk’s recent announcement about the production of batteries for homes and commercial buildings. He noted that they basically sold the factory’s first year of production capability in a week and that the facility could focus on just those offerings and run at full capacity for some time.

Musk said that the company already has 38,000 reservations for the home wall unit and 2,500 from large industrial companies or utilities. He’s considering increasing the production capacity of the plant, for which construction only recently began in Nevada.