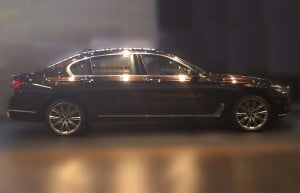 Remember the BMW 7-Series? It seems like a lot of premium luxury products have slipped into the shadows since the launch of the latest-generation Mercedes-Benz S-Class two years ago. And that’s something the Bavarian maker is determined to fix with the upcoming launch of an all-new 2016 BMW 7-Series later this year.

BMW is planning to give journalists a first look at the new model, codenamed G11, in August, the public having to wait until the Frankfurt Motor Show a month later. But It’s offering a teaser silhouette ahead of those previews – and the website BimmerToday has captured a side image offering even more detail.

What’s in store for potential buyers? Among other things, expect significant improvements in handling and performance, sources suggest, while the new model will drop nearly 300 pounds, offer improved fuel economy and, quite likely, a new hypermiling plug-in hybrid. Expect also to see some significant new digital technologies, from a new gesture-controlled version of the familiar BMW iDrive to a remote-control parking system.

The images here reveal that BMW isn’t straying all that far from the styling of the current 7-Series, though it does adopt a slightly more fastback shape. That was likely dictated by the wind tunnel, BMW – like most manufacturers today – heavily focused on reducing fuel-robbing drag. As part of the process, look for such additions as air breathers that reduce turbulence in the wheel wells. 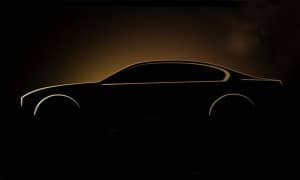 An official BMW rendering of the 2017 7-Series' silhouette. The sedan will debut in August.

Weight is equally influential on both performance and fuel economy, and BMW reports the 2017 7-Series will lose above 290 pounds compared to the outgoing model without sacrificing roominess. Significantly, it will be the first mainstream model in the BMW line-up to make extensive use of carbon fiber-reinforced plastics.

(Automakers put their cars on a diet. Click Here for the story.)

Ultra-light, super-strong CFRPs are seen by many industry experts as the way of the future. The material is already in use on the new BMW i3 and i8 plug-based models and the maker is building the world’s largest carbon fiber plant in Washington State, a move that will both increase availability and drive down cost. But this isn’t the same aero grade material most folks have become familiar with. It’s lower cost but loses that distinctive weave pattern in the process.

In terms of powertrains, the new 7-Series will adopt a mix of 6-, 8- and 12-cylinder offerings. The sixes are the latest-generation and deliver eight-cylinder power while lowering fuel consumption – especially when paired with an updated, 8-speed Steptronic transmission. Among the packages, the 3.0-liter straight-six that first will be used in the 2016 BMW 340i.

At some point in the lifecycle of the big new sedan, meanwhile, expect to see BMW add a new plug-in hybrid. Like rival Mercedes-Benz, which will add 11 PHEVs to its line-up by 2017, BMW is betting big on the technology to help it meet tough new emissions and mileage standards. It will become even more critical in China where cities like Beijing and Shanghai now limit monthly new car registrations to deal with smog and traffic while lifting limits on qualifying battery vehicles.

Technology is the name of the game in the premium luxury segment, as Mercedes proved with the latest S-Class. Expect to see the 2017 BMW 7-Series respond to most of its rival’s features and then add plenty more.

Significantly, the new 7 is expected to be the first BMW model to offer a touchscreen version of the familiar iDrive – and it reportedly will also be able to read a driver’s gestures, as well.

BMW also is expected to put into production a new remote-parking system that would allow you to get out of the car, press a button and have the vehicle go find an appropriate spot – something that could tick off valets around the world.

(Chevrolet offers a sneak peek at all-new 2016 Camaro. Click Here to check it out.)