Process helping them win, both on track and on the street. 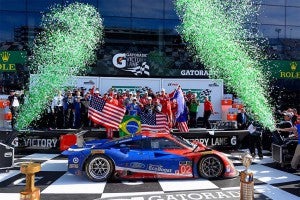 The Chip Ganassi Ford Prototype taking the win at the Rolex 24 race at Daytona.

When the Chip Ganassi Racing Ford prototype blasts out of the pits during the TUDOR United SportsCar Championship race at the Belle Isle Grand Prix in Detroit this coming weekend the team will aim to repeat the win it scored during the Rolex 24 at Daytona.

The No. 01 prototype will be powered by a Ford EcoBoost engine, with about 70% of the twin-turbo V-6’s parts street stock. Among the parts customized for the track was an intake manifold that was little more than a vat of goo and a digital file prior to the Daytona race. Ford turned to 3D printing rather than conventional manufacturing methods for the manifold and several other components.

“3D computer printers have totally changed the development process for our Daytona Prototype race cars,” said Victor Martinez, 3.5-liter EcoBoost race engine engineer. “3D printing has advanced at such lightning speed in recent years that in a matter of hours, we can create real, usable parts for race cars. That’s exactly what we did for the 24 Hours of Daytona earlier this year.” 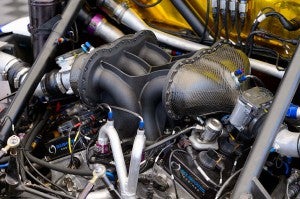 Also known as stereolithography, 3D printing can transform digital Computer Aided Design, or CAD, files into tangible objects simply by blasting a laser beam into a vat of resin or a variety of other materials, including titanium powder.

The U.S. military is experimenting with the idea of using the technology to produce critical parts for tanks and weapons right at the front, rather than having to wait for supply lines. At the other extreme, new 3D printers have dropped to less than $1,000, allowing tinkerers and small businesses to print out virtually any shape they fancy.

Automakers have become particularly intrigued with the technology because of the speed with which they can transform ideas into hard parts. That’s especially useful in the racing environment where competitors are constantly tinkering in a bid to improve performance on the track. But even for street use there are potential benefits.

In the early stages, a product development team may come up with a variety of digital alternatives to improve a prototype vehicle’s powertrain, or reduce wind drag. The 3D printing process allows them to transform the CAD file’s code directly into a part or component.

That was something Ford relied on heavily during the development of its aluminum-intensive F-150. Chrysler has used the technology to quickly test a variety of sideview mirror shells in its wind tunnel to reduce drag.

Racing has driven much of the push, however. Nissan has used stereolithography for the brake inlets and other parts on its distinctive, dart-shaped race car.

But there’s increasing interest in taking the technology and using it for production vehicles. Mercedes-Benz officials have suggested they might include 3D-printed parts, such as air vents and speaker grilles, on their next S-Class model which is due to market in 2018.

Ford reportedly bought the third 3D printer ever made 30 years ago. Today, it has a number of the devices in operation at various facilities and they not only can work with plastic resin but sand, silica powder and even powdered metals.

Prices for the technology have been falling, even as the printers become more flexible. Precision is also improving, so there’s less of the pixelated appearance to parts compared to earlier 3D printers.

Perhaps the biggest challenge will be speed, however.

At the Detroit Auto Show last January, start-up Local Motors showed how to take 3D printing to the ultimate extreme, using the process to create an entire vehicle on the floor of the Cobo Hall convention center. But the process of printing the vehicle’s body panels and chassis took about 44 hours, far too long for mainstream manufacturers. Ford, for example, rolls out a new F-Series pickup from its suburban Detroit assembly plant about once a minute. It would need thousands of 3D printers to match that pace.

On the other hand, for a company like Local Motors, targeting extremely small volumes, the technology could have a practical advantage.

“Micro-factories are a great counterpoint because they employ an economy of scope by taking advantage of low cost tooling and co-creation,” John Rogers, co-founder of Local Motors, said in Detroit, “resulting in the ability to get products to market faster and in less time while using less capital to find a winning concept.”

Whether 3D printing will ever fully replace the big plants that dominate the auto industry seems unlikely – for now – according to manufacturing experts. But the technology is quickly finding a niche. Another win by the Ganassi team this weekend could further enhance its appeal.