Drivers Get Break on Cost of Ownership 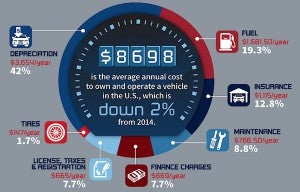 AAA says vehicle ownership costs are going to fall this year by 2% due in part to low fuel prices.

If you’ve gotten used to the idea that you’ll always be paying more – for housing, food, clothing – you may be in for a pleasant surprise when it comes to driving, as you can expect to pay about 2% less to operate your car this year.

Credit lower fuel costs and cut-rate car loans, according to the AAA’s annual “Your Driving Costs” study. Unfortunately, the survey also found that some other automotive expenses are expected to rise this year, notably including auto insurance, maintenance and tires. And if you’re planning to buy this year, AAA cautions that you’ll likely be getting less for that trade-in, which translates into higher depreciation costs.

Nontheless, “Car owners can look forward to saving approximately $178 this year,” explained John Nielsen, AAA’s managing director of Automotive Engineering and Repair, and the savings will be even greater for those driving large, fuel-hungry vehicles such as minivans, pickups and SUVs, the AAA reported.

The study was based on what it costs to operate the typical vehicle, clocking 15,000 miles a year. The AAA figures it will cost 58 cents a mile, or about $725 a month.

Of course, as the cliché goes, “results may vary,” depending on the specific model, as well as how and where your drive. As TheDetroitBureau.com recently reported, a motorist in Michigan might pay twice as much as one living in Maine for car insurance. A New Jersey driver will pay substantially less than someone living in California for fuel.

Finance charges took an even bigger dip, the organization found, dipping 21.02%, to $669 annually, a savings of $178. Again, that’s an average that could vary widely depending on a buyer’s credit score, and what lender they use.

Now, here comes the bad news. Depreciation will increase $144, or 4.1%, AAA forecast. The steady decline in the value of your car, truck or crossover makes up the largest single share of the annual ownership cost, about 42%, or $3,654.

And it can slide up or down depending on the state of the used car market. In recent years, a shortage of high-quality “previously owned” vehicles made it a seller’s market. Now there’s a glut and buyers are in the driver’s seat.

On a percentage basis, the biggest increase comes in the insurance category. The AAA anticipates an 8.99%, or $92, increase this year. The average motorist will spend $1,115 for an auto policy in 2015.

Longer term, the AAA survey could raise concerns. Fuel prices have already begun to rebound after dipping below $2 a gallon in much of the country early this year. How much further prices could increase – and how quickly – is far from certain, but most forecasts call for an upward trend.

Meanwhile, the Federal Reserve is expected to increase interest rates as the nation’s economic recovery continues. Those two factors alone could translate into higher operating costs in 2016 and beyond.