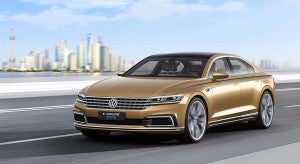 Volkswagen C Coupe GTE made its debut in Shanghai. The model will be VW's flagship in China.

It wasn’t all that long ago that Chinese motorists had to wait to see the debut of products already on sale in other parts of the world. These days, a growing number of manufacturers are introducing some of their newest products first in China, the world’s largest automotive market.

And more than a few of these vehicles will – at least initially – only be offered for sale in the booming Asian nation. That’s the case with the next-generation Ford Taurus, as well as the new Volkswagen C Coupe GTE that is making its debut at this week’s Shanghai Motor Show.

Measuring a full 200 inches in length, with a 76-inch width, this is no Beetle or Golf, but a car aimed for premium buyers who might not want to go all the way up to an Audi. Indeed, the C Coupe is the first model from Volkswagen to share the larger MLB “architecture” primarily designed for the Audi brand, rather than VW’s smaller MQB.

It’s more than just a size issue. Where vehicles like the Golf use a transverse engine layout, Audi’s platform goes for a more high-end approach with a longitudinal, or “North-South” powertrain. 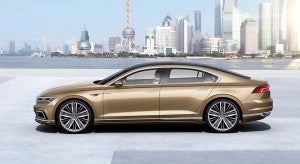 The approach shouldn’t be a complete surprise. VW brand officials have been hinting that they have an all-new flagship coming, and “The evolution of the Volkswagen design DNA shown here will accompany us worldwide,” noted Klaus Bischoff, the brand design chief, “on the way to the new Phaeton.”

The C Coupe gets a relatively long nose, sweeping roof line and short rear deck, the slat grille helping distinguish it from similarly sized Audi models. This is a coupe in name only. There are not just four doors, but big portals for rear seat passengers.

That reflects a key aspect of the Chinese market: upscale buyers routinely opt to sit in the back seat and turn over the often unpleasant task of negotiating crowded urban streets to their chauffeurs. In turn, makers need to add extra inches of rear legroom and load the back up with extra comfy seats and the sort of touches normally found up front.

In the case of the VW C Coupe, that includes separate infotainment and climate controls operated by two personal 4.5-inch touchscreens in the center console. Each rear seat passenger also gets a 9.5-inch screen for viewing videos. 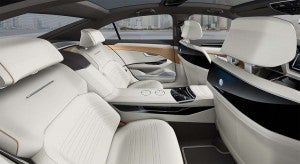 In the VW C Coupe, each rear seat passenger also gets a 9.5-inch screen for viewing videos.

“In the rear, there are two individual seats that show who the most important passengers are,” explains a VW release. “The rear of the interior is characterized by a lounge-like ambience that features a higher proportion of materials such as wood and leather. The door panels with their wooden elements create a cocoon-like feeling.”

As we’ve seen from Volkswagen a number of times over the last year, the C Coupe is being introduced in GTE form – Volkswagen shorthand for a battery-based drivetrain. In this configuration, that means a turbocharged four-cylinder gas engine making 208 horsepower that has been paired with a 122-hp electric motor. Both send power through an eight-speed automatic.

Using the European test cycle, the VW C Coupe is expected to get 102 miles per gallon in combined driving. Cut that be as much as a third to get a sense of what it would deliver here in the U.S. using the stricter EPA test cycle.