Maker is the latest to try price cut to boost sluggish sales. 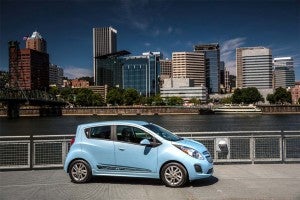 General Motors is slashing the price of its slow-selling Chevrolet Spark battery-electric vehicle in a bid to boost demand.

It’s the latest in a string of price cuts by automakers struggling to build interest in plug-based vehicles, and the announcement comes just days after GM confirmed it will next month shut down production of its Chevy Volt plug-in hybrid due to lack of demand. It will re-launch production with the second-generation Volt that was introduced at the Detroit Auto Show earlier this year.

“Chevrolet is committed to making EV driving more accessible, affordable and fun” Steve Majoros, director of Chevrolet Car and Crossover Marketing, said in a statement. “Spark EV customers will benefit from an impressive blend of technology, capability and low cost of ownership, now at an even more impressive price.”

GM also will now offer a discount, low-mileage lease on the Chevy Spark EV of as little as $139 a month.

(GM halting Chevrolet Volt production in May. Click Here to find out what’s next for the plug-in hybrid.)

Chevy has sold just 2,116 Spark EVs since the model was launched in June 2013. That’s a small fraction of overall Spark sales, but the battery version was nonetheless eighth among all pure BEV models last year.

The Spark is what some critics have dubbed a “compliance car,” sold in only a handful of markets, such as California, to meet strict state emissions standards. For now, it is only offered in California and Oregon, but will be shipped to dealers in Maryland, as well, later this year.

(Click Here for our review of the new Tesla Model 70d.)

With the rare exception of the Tesla Model S, it is hard to find a plug-based vehicle that hasn’t had a price cut over the last several years. That includes the Chevrolet Volt, as well as the Ford Focus EV, which saw a $6,000 price drop in October, as well as the Nissan Leaf and Mitsubishi MiEV.

Industry officials acknowledge that high prices have limited battery-car demand. But they also stress that they have long promised to reduce prices as the cost of components – primarily batteries – come down.

Chevy is counting on lower battery costs when it introduces a second pure battery-electric model next year. It expects to market the new Chevrolet Bolt for less than $30,000 after the federal tax credit. But that new model also is aimed at addressing another big concern for potential EV buyers. It is expected to deliver about 200 miles per charge, or more than double the current range of the Spark.

Other makers are looking to boost range, as well, including Nissan which hopes to approach 200 miles when it launches the second-generation Leaf in a couple years.

(For more on the battery-car pricing wars, Click Here.)