Crash: Automakers Race to Outdo Each Other with New, Low-Cost Anti-Crash Technologies 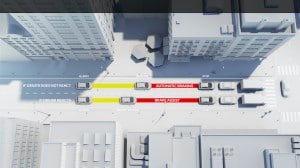 Toyota's Precollision System uses a camera and laser radar to detect objects and prompt the driver to brake with an audio and visual alert.

This is one collision motorists can look forward to.

Just in time for this week’s New York Auto Show, Toyota announced plans to roll out several low-cost packages combining an assortment of advanced anti-collision technologies. Rival makers have spent the last few days promising to come up with comparable systems, suggesting that they could yield huge reductions in highway crashes, injuries and deaths.

“We’re so serious about safety we will introduce this technology on virtually all of our vehicles, from top to bottom,” promised Bill Fay, head of the Toyota division, during a Thursday news conference at New York’s Jacob Javits convention center.

Priced anywhere from $300 to $635, the Toyota systems will start with such features as:

The upgraded package will add the ability to spot pedestrians who might be in the vehicle’s path, sounding an alert or, if necessary, applying the brakes automatically.

Adrian Lund, director of the Insurance Institute for Highway Safety, or IIHS, has called forward collision warning systems one of the automotive safety biggest breakthroughs in recent years, government data revealing a significant reduction in crashes. The IIHS won’t even give its Top Safety Pick+ rating to vehicles that don’t offer some version of anti-collision technology.

Several other automakers, such as Subaru, have begun combining advanced safety features and driving down costs. Industry officials note it’s possible to share cameras, radar and other sensors, as well as the necessary computing systems, for different functions. That helps drive down costs much the way electronic makers have been able to do so by packing in smartphone features.

For decades, the auto industry mantra was that “safety doesn’t sell.” But that has turned upside down. “One of the first requests consumers have is safety,” said Nissan CEO Carlos Ghosn, during a NY Auto Show interview. “And those requests are becoming more sophisticated. I’m expecting all those (collision avoidance) functions to become more generalized and drop in cost,” Ghosn added.

Such technology, Ghosn added, is fundamental to the autonomous vehicles expected to become commonplace in the coming decades. For its part, Nissan hopes to have its first fully autonomous vehicle in showrooms sometime in 2020.

Both safety groups like IIHS, along with federal regulators, are watching closely to see how effective the new generation of advanced anti-collision technology proves to be. Some advocates say it will prove critical to the long-term goal of reaching zero deaths on US highways. And some believe that if the technology does prove effective it may eventually be required, much as antilock brakes and stability control went from being $2,000 options to standard gear.