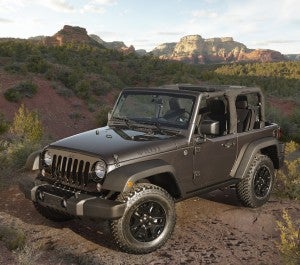 The Jeep Wrangler is the least expensive vehicle to insure, according to Insurance.com.

Jeeps are thought of go-anywhere vehicles engaged in treks that might cause a bump, scrape or significant collision. However, despite this confluence of capability and possibility, the Jeep Wrangler Sport 4WD is the least expensive vehicle to insure.

While sport-utility vehicles and minivans are the cheapest vehicles to ensure, two other Jeep models joined the Wrangler among the top 10 least expensive vehicles. The Patriot and Compass were second and sixth on the list, according to Insure.com.

The average premium for the U.S. is $1,555, although it varies greatly depending upon where you live.

“Insurance rates are all about claims – how many and how big,” said Penny Gusner, consumer analyst at Insure.com. “Cars that are cheapest to insure typically are easy to repair or have fewer claims or both.”

The Wrangler can cost as little as $694 annually to insure in Maine and as much as $2,027 in Michigan, which has some of the highest rates in the nation. Below is the list of the least expensive vehicles.

One of the surprises on the list is the Smart ForTwo, but there are a few reasons, experts claim. First, it’s not an expensive car to begin with at $13,270. 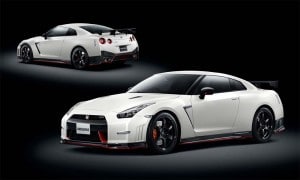 Nissan's GT-R Nismo is the most expensive car to insure.

“Collision and comprehensive insurance (premiums) are to a large extent driven by the cost of a vehicle, and the Smart Fortwo is one of the least-expensive vehicles for sale in the United States,” said Matt Moore of the Highway Loss Data Institute (HLDI).

The Fortwo also doesn’t cost insurers much in claims. It’s collision losses are 32% below average, according to the HLDI, and 45% less than average for theft and other non-crash losses. It’s a city car so the accidents it’s involved in are more likely of the minor variety unlike those that occur when driving along the highway.

The most expensive vehicle to insure on average? The Nissan GT-R Nismo at $3,574 annually.

(Click Here for more about GM’s alleged cover up of its ignition switch problems.)

The GT-R Nismo is a $150,000-plus sports car with a 600-horsepower twin-turbo V-6 engine, capable of top speed of 196 mph. The list is unsurprisingly dominated by high-priced sports cars.

The averages were calculated using data from six large carriers (Allstate, Farmers, GEICO, Nationwide, Progressive and State Farm) in 10 zip codes per state, according to Insure.com. Averages are based on full coverage for a single 40-year-old male who commutes 12 miles to work each day, with policy limits of 100/300/50 ($100,000 for injury liability for one person, $300,000 for all injuries and $50,000 for property damage in an accident) and a $500 deductible on collision and comprehensive coverage.

(To see more about the drop in gas prices, Click Here.)

This hypothetical driver has a clean record and good credit. The rate includes uninsured motorist coverage. State averages were calculated by averaging the rates for all 1,522 models surveyed for each state.