Maker looks for new options, new models as it aims to double sales. 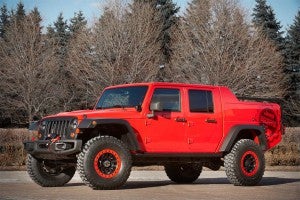 The shape of things to come? The Jeep Wrangler Red Rock Responder concept could be followed - eventually - by a production Wrangler pickup.

Looking to nearly double global sales by 2018 – while also having to address increasingly stringent emissions and fuel economy standards — Jeep is looking at a variety of product and powertrain options that could include a new pickup as well as the brand’s first plug-in hybrid, revealed CEO Mike Manley.

Jeep recently launched its smallest model, the new Renegade, and is gaining momentum in markets as diverse as Beijing and Berlin. It is adding new factory capacity in Europe, Asia and Latin America, and is set to make a critical decision about future production at its ancestral home in Toledo, Ohio.

It is “a transformational year,” said Manley, during a preview of seven concept SUVs Jeep will take out onto the trails during its annual Easter Safari in Moab, Utah.

The SUV arm of Fiat Chrysler Automobiles set an all-time sales record of 1 million vehicles last year and, as part of the five-year plan announced last May, the brand is now aiming for 1.9 million. Manley said he is confident Jeep will hit another record this year and while he said he currently is sticking with the plan’s targets, “I’d like to think we could clearly do better.”

(Jeep Wrangler rated “most affordable” in new study of insurance costs. Click Here for the story.)

About 45% of the brand’s business is expected to come from outside North America by 2018, and the pint-sized Renegade is a critical link in that plan. In an unusual move, the little ute was launched in Europe well ahead of its arrival in U.S. showrooms. 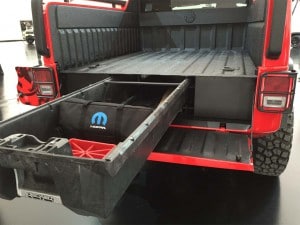 Production of the American version is now underway in Italy. Meanwhile, Jeep is getting ready to significantly expand its manufacturing footprint. A new Brazilian plant will officially go into operation next month, while a Chinese assembly line will follow by year-end.

One of the big uncertainties surrounds the oldest of the Jeep plants, a factory in Toledo, Ohio producing the maker’s familiar Wrangler model. FCA Chief Executive Sergio Marchionne last year warned the facility might be abandoned when an all-new Wrangler is introduced sometime in 2017.

That has triggered intense talks between the parent company and Toledo and Ohio officials. Financial assistance is believed to be one of the issues, but Manley suggested there are other challenges, including the need to ensure the changeover can take place with the shortest possible disruption. A major tear-up is expected, in part because Jeep reportedly is considering a switch from a steel to lighter aluminum body in a bid to improve Wrangler’s less-than-stellar fuel economy.

“There’s no set date for a decision, but obviously there’s a lot of pressure and interest to make a decision as soon as possible,” Manley said during a conversation following the preview of the Jeep Moab concept vehicles.

The executive noted that Jeep is looking at a number of options to improve the mileage of its various models, suggesting that, “at some stage, hybridization for Jeep is inevitable…to meet the targets.” And while Manley cautioned that no decision has yet been made, “No doubt, a plug-in hybrid is an attractive option,” he said, quickly cautioning it is also an expensive one.

A growing number of automakers are launching plug-ins. BMW this week revealed the first PHEV in its own SUV line-up, the X5 xDrive40e. Mercedes-Benz, meanwhile, confirmed that a plug-based version of its popular GLE ute will be one of the ten new PHEVs it intends to launch by 2017.

(For more on the new BMW plug-in hybrid, Click Here.)

Among other big decisions Jeep has to make will be how to proceed on a long-debated new pickup model. Manley noted he is “absolutely on the record (as) a huge fan of a pickup truck in the Jeep brand.”

He also said that if one were to come, “We would do it with the next…Wrangler,” which would push such an addition to the line-up out to some point around 2017 or beyond.

While the use of the Wrangler might suggest a midsize truck, Manley said it would share some key features with the bigger pickups of FCA’s Ram brand – most notably a minimum five-foot bed which “would be a lifestyle thing for people to get their toys in the bed.”

A Wrangler-based pickup would have to be rugged enough to do double-duty as both a work truck and as a personal use vehicle, Manley added.

Company insiders suggest that the goal would be to design pickup capabilities into the next Wrangler platform right from the start, meaning a go/no-go decision on a pickup will need to be made soon.

(Jeep takes over as Chrysler brand abandons Britain. Click Here for the news.)