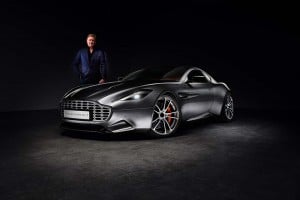 Henrik Fisker is back from his ill-fated attempt to produce electric vehicles with his Thunderbolt GT Coupe concept.

Danish designer Henrik Fisker has emerged from the shadows after his ill-fated attempt to launch a plug-in hybrid sports car company. And he offered up two visions of is future over the weekend during an appearance at the annual Amelia Island Concours d’Elegance.

That included the production version of the Fisker Rocket, a customized, 725-horsepower version of the all-new 2015 Ford Mustang, as well as the Fisker Thunderbolt concept. The latter design is being billed as a “personal interpretation” of the Aston Martin V12 Vanquish.

“I wanted to create an elegant beautiful GT sports coupe, with pure emotional sculpture, that would stay timeless,” said Fisker.

The decision to reimagine the Aston Vanquish shouldn’t come as a surprise to those familiar with Fisker’s work – especially in the years before he attempted to design and market the Fisker Karma plug-in hybrid. The Danish designer spent much of his career working for Aston Martin, and the V12 Vanquish is generally seen as one of his most successful projects.

The Thunderbolt is based on the Aston Martin V12 Vanquish.

As with the Rocket Mustang – which actually will be sold in small numbers – the one-off Fisker Thunderbolt concept opts for hand-laid, carbon-fiber bodywork. It features sleek, creaseless body sides and deeply sculpted air ducts.

There’s a large power dome on the hood with triangular air intakes, narrow headlamps and blade-like LED taillamps. The rear window is now a wraparound design, and there’s a dark tinted panoramic roof.

The Thunderbolt is the second of Fisker's new entries.

The Thunderbolt sits 15 millimeters – about 0.6 inches – lower than the stock Aston Vanquish and rides on 21-inch alloy wheels shod with performance tires.

Inside, Fisker updates the Aston’s standard cabin with an 11.6-inch Panasonic Curved Control Screen that serves as the command center for an array of new connected car features. For those who prefer more traditional, mechanical details, Fisker partnered with Swiss watchmaker Maurice Lacroix to incorporate a Skeleton Chronograph into the dashboard.

The interior is trimmed with leather trim upscale Italian furniture maker Natuzzi. And, to complete the package, there’s a built-in holder to handle a bottle or two of champagne – for sharing only after a successful day of driving, of course.

Curiously, while a news release issued by the Fisker team insists “there will be no commercialization of the prototype,” the statement goes on to suggest there have already been some inquiries likely to result in the production of “an extremely limited number of additional cars.”

The interior of the Thunderbolt GT concept.

(To see more about Chevy’s plans to debut the new Camaro on May 16, Click Here.)

The timing and price were not announced.

The Thunderbolt was developed as part of an expanding partnership between Fisker and Los Angeles-based Galpin Motor Sports. A subsidiary of Galpin Motors, it is also behind the development of the Fisker Rocket Mustang.