Price isn’t the biggest factor in making the list. 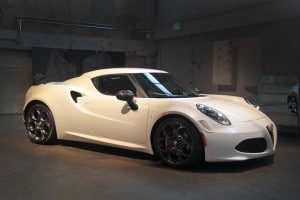 The first 500 Alfa Romeo 4Cs sold in the U.S. get the "Launch Edition" name, becoming an instant collectible.

Most cars are just basic transportation, but a few transcend the moment. Oh, to have bought – and kept – a 1970 Plymouth Hemi Superbird, a 2003 Ford GT or a Ferrari 250 GTO.

If you’re looking to buy a new car this year but want to get something that won’t be just another commodity, losing value every year until it’s time to trade in or, worse, send it off to the junkyard, McKeel Hagerty, head of the leading classic car insurance company, puts together an annual list of the new models most likely to become collectibles.

“They all have some characteristics that are shared by the great collectible cars” of years past, says the CEO of Hagerty Insurance.

The list automatically assumes the new McLaren P1, Ferrari 458 and other exotics are destined to be collector cars. So, the list focuses on models priced under $100,000. Not surprisingly, it focuses on performance cars, though not all are high-powered monsters like the 707-horsepower Dodge Challenger Hellcat or the Chevrolet Corvette Z06. The 25th Anniversary Edition Mazda Miata, fans are likely to say, has “just enough” to power to make it fun to drive.

(To see the 10 weirdest auto accessories ever, Click Here.)

Here, in alphabetical order: the 10 Most Collectible Cars of 2015: