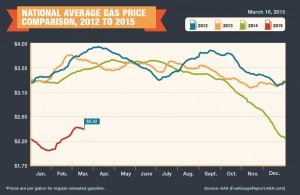 After rising daily for more than a month, gas prices have dropped again.

After rising by 20 cents per gallon, gasoline prices have begun to drop again slightly, according to the AAA Gas Gauge.

A string of 40 consecutive daily price increases at stations across the country ended abruptly last month. It was the longest streak of rising prices in two years and due to the combination of rising crude oil costs, refinery maintenance and unplanned production problems in the Middle East where terrorism and warfare remain a threat.

During this period, average gas prices increased by 43 cents per gallon, but have fallen by a half cent since Saturday. While today’s price of $2.45 per gallon is three cents more than one week ago and 28 cents more than one month ago, pump prices continue to reflect a substantial yearly discount. Compared to the same date last year motorists are saving an average of $1.04 per gallon.

Retail gas prices typically trend higher this time of year as suppliers undergo maintenance and plan to reduce winter grade fuel in preparation for the changeover to summer-grade gasoline, according to AAA.

The biggest price increases have come along the West Coast, which has seen particularly dramatic run-ups over the last several weeks due to a number of supply issues. An explosion last month at ExxonMobil’s refinery in Torrance, California, has kept that facility running at severely reduced rates. Production at Tesoro’s refinery in Martinez, California, also remains limited as it aims to restart after recent planned maintenance.

The result for motorists is a statewide average in California of $3.43 that is the highest in the nation, AAA reported.

Meanwhile, the price of crude oil and crude oil futures dropped below the $50 per barrel level that had bolstered prices.

April crude oil traded towards the top end of its recent trading range trading to highs of $52.40 per barrel on the New York Mercantile Exchange.

(Click Here for details about the number of vehicles getting less than 20 mpg are on the decline.)

Last week, a return to bear market sentiment sent crude back down to the lower end of the range with April crude settling on Friday, March 13 at $44.84 – just 47 cents above the lows of $44.37 established on January 29, 2015. As prices fell throughout last week, the bears called for lower oil prices.

The price dropped despite a gradual reduction of crude oil production. The low prices have also prices have forced major oil companies to re-evaluate investments in oil that expensive to recover, such as tar sands, but has not produced any kind of dramatic upward shift in crude futures.

Predictions are that gasoline will remain a dollar or more less expensive than it was a year ago and the same pattern could well prevail in 2016 as oil prices struggle to recover.