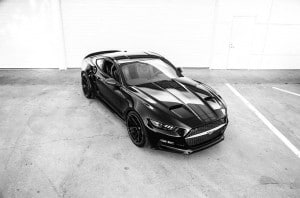 The supercharged version of the Fisker Rocket will deliver nearly 300-hp more than the Mustang GT.

Four months after pulling the wraps off his automotive reincarnation, Danish designer Henrik Fisker is set to deliver the first of his 725-horsepower Rocket Mustangs.

The result of joint venture with California mega-dealer Galpin Motors, the first production version of the Fisker Rocket will make a brief appearance at this weekend’s Amelia Island Concours d’Elegance before being delivered to its new owner.

Word has it that Fisker may also reveal another big project at the weekend classic car show, something he telegraphed during an interview with TheDetroitBureau.com last November at the L.A. Auto Show where the Rocket made its premier.

The Fisker name has, in recent years, been most closely associated with the eponymous plug-in hybrid car company that crashed and burned several years ago after running through an estimate $1.5 billion or more in investors’ money. Its few remaining assets were auctioned off to a Chinese auto wannabe that has yet to lay out a clear revival plan. 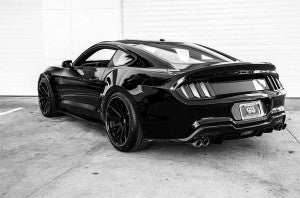 The Rocket swaps out most of Mustang's steel body panels for lightweight carbon fiber.

But Henrik Fisker began life as a well-regarded designer who penned such projects as the Aston Martin DB9. And after the collapse of Fisker Automotive he was expected to return to his specialty.

In fact, he is trying to maintain a finger in the entrepreneurial world, in this case pairing up with Galpin Auto Sports, the racing subsidiary of Galpin Motors.

Their first project starts out with the 50th anniversary Ford Mustang but undergoes extensive changes, top to bottom.

Visually, the Rocket gets a larger trapezoid grille than the stock Mustang GT, with a silver bar bearing the familiar pony logo. The Rocket is slightly wider, and the rear windows and quarter panels have been tweaked to give it a more exotic appearance. The modified Mustang rides on unique 21-inch wheels bearing the “HF” Fisker logo and shod in Pirelli P-Zero rubber. 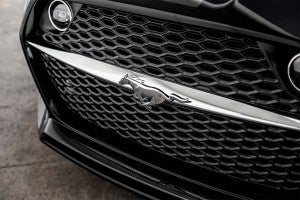 The Rocket's grille offers a unique treatment to the familiar Mustang pony logo.

With the exception of the hood and roof, every body panel has been replaced with lightweight carbon fiber to boost the performance factor even more.

(New GT “ultracar” will be Ford’s most expensive model ever. How much? Click Hereto find out.)

Meanwhile, a variety of modifications under the hood helps bump power to as much as 725-hp, up from the 435 ponies produced by a stock 2015 Ford Mustang GT – and well above the 500-plus horsepower expected from the production version of Ford’s own Mustang GT350. The top-rated model gets a supercharger to deliver that added performance.

The Rocket will be fitted with the Mustang Performance Package, which includes such niceties as a larger radiator with oil cooler, unique chassis tuning, gauge pack and 6-piston front Brembo brakes. Also standard: a Bassani cat-back exhaust system with quad tips. 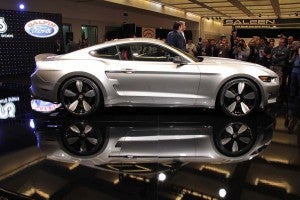 The Fisker Rocket shown at its LA debut.

Serious performance fans will also be able to upgrade to a larger Brembo brake package including two-piece drilled rotors in the rear.

“The response has been overwhelmingly positive from all over the world,” said Beau Boeckmann, President, adding that, “You can’t get better feedback” than the project has received since its L.A. Auto Show debut.

Neither Fisker nor Boeckmann have said how many Rockets will be produced, though they suggest the number will be “limited.” Pricing starts at $109,100 and jumps to the $125,000 for the supercharged version.