Camaro invites up to 1,000 fans to come to Detroit's Belle Isle for the 2016 Camaro preview.

Chevrolet plans to give about 1,000 lucky muscle car fans the chance to get a first look at the next-generation Camaro.

The Detroit maker has been dropping lots of hints about the sixth-generation Camaro in recent weeks and today confirmed it will unveil the new pony car on May 16th during an unusual, day-long celebration on Belle Isle, the 982-acre island park a couple miles from parent General Motors’ downtown Detroit headquarters.

“This will be an event Camaro fans will not want to miss,” proclaimed Todd Christensen, Camaro marketing manager. “This is only the sixth time we have introduced an all-new Camaro. We wanted to share the moment with the customers and fans who have helped make Camaro both America’s favorite performance car for the past five years, and a cultural icon since 1967.”

Chevy says the event will be free but space will be limited, so those who hope to attend will need to register quickly at www.thecamarosix.com. 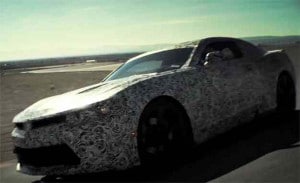 Chevrolet's video gives the world a brief look at the Gen-6 2016 Camaro.

(Chevy video teases the 2016 Camaro. Click Here for the story.)

Along with the unveiling, the automaker will set up a “Camaro Museum” to highlight the nameplate’s history. And it will give fans hot-laps, following the course of the Belle Isle Grand Prix set to run on the island two weeks later.

The new 2016 Chevrolet Camaro will have some big expectations to live up to. Chevy revived the nameplate for 2010 after a long absence. While the old Camaro had long run in the shadows of Ford’s popular Mustang, the Chevy muscle car has dominated the segment since its return. But Ford launched an all-new version of its pony car last year, and the 50th Anniversary Mustang has been a smash hit, regaining its lead in the U.S. and quickly gaining traction as it goes on sale worldwide for the first time.

(Mustang ponies up and regains sales lead over Camaro. For more, Click Here.)

Chevy hasn’t said much about what it has in store with the Gen-6 Camaro, but at least some details have come to light in recent months. Among the most significant: the muscle car will migrate to the same, slightly shorter platform now used by the Cadillac ATS line.

Chevy gave a brief look at a thinly disguised version of the 2016 Camaro undergoing track testing last week. The overall look appears to be a bit sleeker and refined – in the manner of a well-toned bodybuilder. The basic layout of the nose retains the look introduced a year ago, with the larger grille below the bumper. The headlamps, meanwhile, sink deep into what appears to be a split upper grille.

The roofline appears to bring one of the bigger changes, in line with reports that the 2016 Camaro will adopt a sort of double-bubble layout, with a little more headroom for each front seat passenger. That would be particularly useful for those buying a next-generation ZL1, for example, with aspirations of strapping on a helmet and heading for the nearest track.

While the new model’s wheelbase will be slightly shorter than the current Camaro, the basic dimensions of the muscle car are largely unchanged.

What Chevrolet clearly hopes won’t change is the strong response American pony car fans have had since the Camaro was brought back to life.

Expect to see Chevy initially reveal the base Camaro and a mid-range performance package. As with the outgoing, fifth-generation model, it will steadily roll out a series of more and more powerful variants, such as the recently added ZL1, the most powerful Camaro ever.

What remains to be seen is how much new technology Chevrolet will introduce for 2016 and beyond. The ZL1 this year has the dubious achievement of being the only remaining Detroit model to be labelled a “gas-guzzler” by the EPA. Its 6.2-liter V-8 manages only 14 mpg in the combined City/Highway driving cycle.

By adding new powertrain technologies – and by improving aerodynamics and trimming vehicle mass – Chevy may be able to both increase power and sidestep the gas guzzler designation with the next Camaro ZL1.

(Click Here for a look at the special edition marking the Gen-5 Camaro’s final run.)