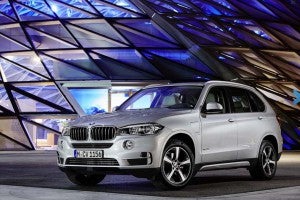 The new 2016 BMW xDrive40e uses a 9 kWh lithium battery to deliver up to 13 miles in electric mode.

BMW is clearly getting charged up about battery power. It’s already launched its new i3 and i8 models, along with some hybridized versions of its conventional product lines. Now, it’s ready to switch on its first plug-in Sport Activity Vehicle, the new X5 xDrive40e.

First shown in concept form as the X5 eDrive at the 2013 Frankfurt Motor Show, the new BMW plug-in comes at a significant time for European luxury makers in general. This month’s Geneva Motor Show was flooded with high-end hybrids and battery-electric models. And Mercedes-Benz this week announced it will add a whopping 10 new plug-ins to its line-up by 2017.

Delivering an estimated 55 MPGe, and up to 13 miles on electric power alone, BMW expects to have the 2016 X5 xDrive40e rolling into U.S. showrooms by autumn.

Compared to the complex plug-in drivetrain of the i8, the layout of the BMW X5 xDrive40e is downright simple. The plug-in pairs a turbocharged 2.0-liter inline-four with an electric motor, both linked to an eight-speed automatic, power then directed to all four wheels through a permanent all-wheel-drive system.

Together, engine and motor produce a peak 313 horsepower and 332 pound-feet of torque. That’s even more power than the conventional six-cylinder X5 xDrive35i, and it’s also quicker, the plug-in launching from 0 to 60 in just 6.5 seconds. Top speed is 130 mph, though it’s limited to just 75 mph if you’re operating in pure electric mode. 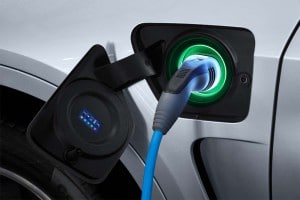 The charger port's LED ring shows when the battery is fully charged and ready to go.

There are some modest but readily apparent visual changes to the xDrive40e, most notably the charger door mounted just forward of the driver’s door. An LED ring around the charger port itself makes it easy to tell when the X5 plug-in is ready to go.

You also can monitor how energy is flowing through a special display on the big iDrive Control Display atop the center stack.

Notes a BMW release, “An energy flow display can be called up while on the move, illustrating in graphical form the interaction between combustion engine and electric motor as well as how energy is being fed to the high-voltage battery. Charging of the battery from the power grid can also be controlled from the iDrive menu using a timer function, which can factor in a planned departure time as entered by the driver.”

The hefty mass of an X5 requires a lot of battery power to get it going, a full 9 kilowatt-hours of lithium-ion cells tucked underneath the luggage floor. That eats up a bit of cargo space which has been reduced to 17.7 cubic feet with the seats up, and up 60.7 cf with them all down.

The electric-only range of the xDrive40e is relatively short, especially at a time when automakers are trying to boost battery-only functionality. BMW suggests it is, “ideally suited to short commutes and quick trips around town.” 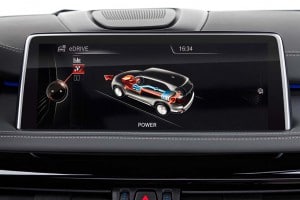 The iDrive display allows a motorist to monitor the way energy is flowing in the vehicle.

It also should help the maker get around new driving restrictions being studied or put in place in megacities around the world. London, for example, exempts plug-based vehicles from its hefty commuter tax. And a number of other cities may entirely restrict access to central urban areas to zero-emissions vehicles, or at least those that can be switched into electric mode. In smoggy Beijing and a number of other cities, motorists buying electrified vehicles are exempt from monthly registration quotas.

BMW also is hoping to tap into a growing market for green, high-tech vehicles among luxury buyers who might traditionally care little about fuel prices.

The Bavarian maker is just one of a growing number of high-end automakers adopting plug-based technology. Mercedes this week said it will roll out a new plug-in vehicle every four months, on average, through 2017. Audi has plans to rapidly expand its e-tron plug-in line-up, while also offering a number of pure battery-electric vehicles. Cadillac already offers the ELR, a dedicated plug-in model. Porsche has several plug-ins. And even Bentley plans to come onboard with a plug-based version of the Bentayga luxury plug-in set to go on sale later this year.