Volvo Will Put 100 Autonomous Vehicles on Road by 2017

Project Drive Me will turn to the public to test the technology. 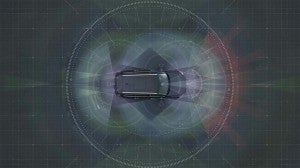 A variety of laser, radar, cameras and other sensors will give the pilot vehicles a 360-degree view.

Volvo plans to launch an autonomous vehicle pilot program by 2017, and it intends to use real motorists in its home town of Gothenberg, Sweden to get feedback on how well the technology works.

Dubbed Drive Me, the project is one of the more ambitious laid out by a conventional carmaker – though tech giant Google is already starting to roll out the first of 100 self-driving vehicles it plans to use as part of a test program near its Silicon Valley headquarters. Most major manufacturers are now working on autonomous technologies, with some predicting the first such vehicles could go on sale early in the next decade.

“We are entering uncharted territory in the field of autonomous driving,” said Peter Mertens, Senior Vice President Research and Development for the Volvo Car Group. “Taking the exciting step to a public pilot, with the ambition to enable ordinary people to sit behind the wheel in normal traffic on public roads, has never been done before.”

At first glance, the vehicles might be taken for any other conventional Volvo vehicle, but they will be equipped with a variety of sensors designed to detect weather and traffic, as well as spot pedestrians and other potential obstacles. These include:

The 100 pilot vehicles also will be equipped with GPS navigation and be linked to a wireless vehicle-to-infrastructure network being set up in Gothenberg.

City officials will have the ability to disable the autonomous technology, say, when weather is bad, or if other problems occur. That would require motorists to take direct control. Indeed, that is an issue that researchers are focusing on closely, as one of the big questions is how long of a warning would a human co-pilot need to take over driving duties if a vehicle’s autonomous technology were to be disabled.

All of the Drive Me vehicles will still be equipped with a conventional steering wheel and pedals, allowing a motorist to take over. That’s a big difference from the Google Car pilot. Only some of the initial vehicles will have traditional controls. Later models are expected to have nothing more than an emergency shut-off button.

Experts disagree over the pace at which autonomous vehicle technology will roll out. Google and Nissan are some of the more ambitious, the Japanese carmaker already promising to have a fully self-controlled product on the market by 2020.

By contrast, “We think it will take a little longer than some other companies do,” cautioned Steffen Linkenbach, the director of the North American autonomous vehicle research program run by Continental Teves, in an interview with TheDetroitBureau.com.

He anticipates that some semi-autonomous systems – such as Cadillac’s SuperDrive which will allow hands-off operation on limited-access roads — will be available by the beginning of the decade. But Linkenbach is among those proponents who don’t anticipate full, self-driving models to reach consumers until as much as a decade or more from now.

The Volvo and Google tests could help determine the actual timeframe for autonomous vehicles to reach production.