But several factors could lead to a modest slide as the decade ends. 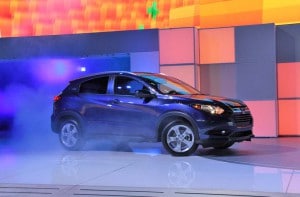 Honda hopes to ride booming demand for small crossovers with the launch of its new HR-V.

After one of the worst downturns in U.S. automotive history, the industry could be in the midst of one of the more long-lasting recoveries, according to a new study predicting sales will continue to grow through 2017.

Americans bought 16.4 million vehicles last year, a nearly 6% year-over-year increase, and well ahead of the predictions most analysts and planners made at the beginning of 2014. AutoPacific Inc. is forecasting demand will rise to 17.0 million this year, and hit a 17.24 million peak in three years before gradually settling back.

“U.S. sales recovery has been steady since hitting the bottom of the decline in 2009,” says Ed Kim, the consulting firm’s Vice President of Industry Analysis. The upward surge will continue, albeit at a slower pace, he predicts, “fueled by continued increases in truck and SUV sales.”

In fact, what Kim calls “the big story” is the explosive growth of the compact crossover segment, among both mainstream and premium brands. That is spurring a flood of new products, ranging from the 2016 Honda CR-V to the Lincoln MKC. And, if the old industry maxim holds true, new product generates more new buyers.

It also is expected to see vehicles loosely grouped into the “truck” category continue to gain momentum at the expense of more traditional passenger cars. AutoPacific forecasts pickups, SUVs, crossovers and other truck models will command a record 55% share of the overall U.S. market for 2015.

(US consumers expect a 50% increase in gas prices by 2017, finds new survey. Click Here for more.)

While some might quibble with the specific figure, most analysts echo that general trend. IHS Automotive anticipates that utility vehicles sales overall will surpass sedan sales in the U.S. for the first time this year, a trend likely to continue even if fuel prices rebound from recent lows.

Even without a downturn in the economy, AutoPacific’s latest automotive forecast anticipates a gradual slide in U.S. demand starting in 2018, with volumes dipping to 16.8 million by 2020. That would still be about 60% ahead of the 10.4 million vehicles sold in 2009, when the American market hit bottom.

(Click Here for details about the all-time high for auto loans.)

Kim cites a variety of factors likely to lead to the next, albeit gradual, automotive downturn:

“Vehicle buyers will be in a negative equity position on their loans a lot longer than in the past, and that will have a profound impact on replacement demand in the future,” Kim warns.

A separate study by Experian Automotive underscores that last point. It found that U.S. motorists now owe a collective $866 billion in car loans. The average term has been stretched to a record 67.2 months – which means borrowers won’t have positive equity in their vehicles for around three years. Interest rates on auto loans in 2014 averaged 4.5%, according to Experian, with the average transaction price running $32,386.

The good news is that this debt doesn’t justify some of the “sky-is-falling” fears that preceded the recent recession, contends Melinda Zabritski, the head of automotive financing for Experian, which found that only 1.47% of loans are currently 60 or more days late.

(Ford turns to a Wall Street veteran as its new chief global strategist. Click Here for the full story.)

The good news for American motorists is that other studies show today’s vehicles are proving more reliable than ever before. In fact, some analysts suggest that improved reliability will lead more buyers to hang onto their cars. And that’s reflected, at least in part, by the fact that the typical vehicle is now about 11 years old, a record, according to industry data.