Nissan Sway concept expected to reappear as the next Nissan Micra. 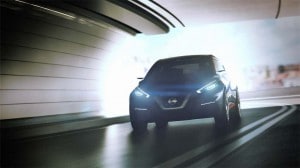 The Nissan Sway concept is believed to be a close-to-production design tease for the next Micra.

Nissan is out to prove that big things really can come in small packages, the maker offering up a first teaser image of the new Sway concept vehicle it plans to unveil at the Geneva Motor Show next week.

The small hatchback is expected to be a thinly disguised version of the next-generation Micra, according to several sources TheDetroitBureau.com spoke with. The Nissan Sway concept underscores the increasingly competitive nature of the minicar market, particularly in Europe, where buyers expect many of the same features, and much the same level of creature comfort, as they’d get in larger products.

“Sway is a glimpse at how a future generation of small Nissan models could look if the company’s striking new design language was applied to a European hatchback,” Nissan said in a short release accompanying the teaser image.

Nissan has been aggressively targeting the small car market, particularly in Europe where buyers have to cope with fuel costs that are still running to as much as $8 a gallon despite the global glut of petroleum. The maker has tried to break out of the pack in recent years with innovative offerings such as the Qashqai and Juke, and now wants to transform the otherwise mundane Micra into something more stylish and distinctive.

While the teaser image is intentionally blurry, it does reveal a little bit about the concept’s styling, notably the so-called V-motion grille that has been used in other recent Nissan offerings. There are some red-tipped side strakes at the lower corners and more distinctive headlights framed by eyebrow-style daytime running lamps.

The overall look is a bit more sporty than that of the current Micra design, clearly influenced by the edgy Juke and Qashqai models.

There are a few typical concept car touches to the Nissan Sway, such as the ultra-thin side mirrors and extra-wide wheels and tires. But the overall look suggests that the basic design details will likely carry over with only slight changes once the next Nissan Micra makes its appearance.

That would surprise no one. The Japanese maker has been using concept vehicles to telegraph what’s coming from both the Nissan and Infiniti brands in recent years. The QX30 concept also making its debut in Geneva is expected to signal the near-final look of the production model set to come to market later this year.

(Click Here to check out the new Infiniti QX30 Concept ahead of its official Geneva debut.)

The timing of the next Nissan Micra is unclear, but the current minicar isn’t expected to be around much longer, as it’s one of the oldest models in the maker’s global portfolio.

The subcompact segment has been growing increasingly fierce in recent years, and in Europe the next Nissan Micra will have to face off against such tough competitors as the Ford Fiesta and Volkswagen Polo.

U.S. buyers likely won’t have access to the next Micra, Nissan using the recently updated Versa to appeal to small car buyers.