New Vehicles Getting Less than 20 MPG on Decline 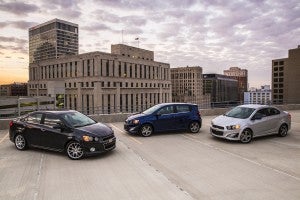 Small cars, like the Chevy Sonic, have helped to push the average fuel economy of vehicles to new heights.

As automakers and the federal government head toward a potential clash over the 54.5 mpg corporate average fuel economy mandate for 2025, a recent study shows that automakers are making substantive gains in fuel economy: about one in four new vehicles get less than 20 mpg.

That’s a significant uptick in just six years, according to the University of Michigan, which show that in 2008, half of new-car buyers in the U.S. bought vehicles that were rated at less than 20 mpg.

The shift is a reflection of several factors that helped push the industry into building and American consumers into buying more fuel-efficient vehicles. The rising price of gasoline, which jumped in wake of a series of hurricanes in fall of 2005, beginning with Hurricane Katrina that swept through the Gulf of Mexico and disrupted the production of gasoline and diesel fuel, set helped renew interest in fuel economy.

Two years after Katrina, the U.S. Congress, with support of environmental groups and national security experts concerned about the risks posed by large imports of crude oil, particularly from the Middle East, finally succeeded in passing a bill that allowed the U.S. Environmental Protection Agency to boost fuel economy standards for the first time in decades.

Fuel-economy standards had been frozen since the late 1980s.

Finally, the 2008-2009 recession pushed American consumers to look for more fuel-efficient vehicles while the long-standing opposition by Detroit’s automakers evaporated under the pressure created by the domestic industry’s financial crisis. The combination of economics, regulation and the resulting investment in fuel efficiency, as well as the advent of electric vehicles, make backsliding very difficult.

The figures from the University of Michigan study underscore the scope of the shift.

The new report found that improvements are present throughout the distributions of vehicle fuel economy.

(Click Here for details about why recall levels will remain high.)

While about 35% of new vehicles sold in 2008 had average fuel economy between 20 mpg and 26 mpg, compared to roughly 31% for model year 2014, huge improvements were made in the sales of fuel-efficient cars, the researchers say.

(To see more about the rise in February auto sales, Click Here.)