Tentative pact reached over the weekend. 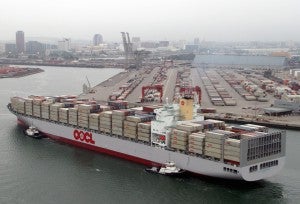 A strike by West Coast dockworkers is now over, but it could take as long as eight weeks to clear the backlog.

Asian automakers with U.S. operations can breathe easier now as a long-strike by West Coast dockworkers is now over, although it will be weeks or months before things are back to normal.

Operations at ports on the West Coast began to pick up over the weekend as the International Longshore and Warehouse Union and Pacific Maritime Association announced they had reached tentative agreement on a new labor agreement.

But observers estimated it could take as long as eight weeks to clear the back log of cargo that had built up at key ports since the middle of January when the port operators began canceling afternoon and evening shifts in response to what they described as a deliberate slowdown.

The dispute caused major delays in shipments of automotive components from East and Southeast Asia, creating major headaches for carmakers.

Honda, which had to scuttle production of up to 5,000 vehicles last week, Toyota, Nissan, Hyundai and Kia, all admitted feeling the pressure from the dispute, which developed slowly during the last nine months, but escalated sharply in November.

The new five-year contract, which covers workers at all 29 West Coast ports, was reached with assistance from U.S. Secretary of Labor Tom Perez and Federal Mediation and Conciliation Service Deputy Director Scot Beckenbaugh.

“After more than nine months of negotiations, we are pleased to have reached an agreement that is good for workers and for the industry,” said PMA President James McKenna and ILWU President Bob McEllrath in a joint statement. “We are also pleased that our ports can now resume full operations.”

No details were released and the ILWU estimated it would take several weeks to complete its ratification process; however, dockworkers started back to work on evening shifts Saturday.

“The evening and night shifts starting tonight are expected to be the first fully staffed resumption of normal operations,” Craig Merrilees, a spokesman for the International Longshore and Warehouse Union, said Saturday.

With the economic costs of the dispute steadily mounting, both the PSA and the ILWU were under increasing pressure to reach an agreement and settle what had turned into the most serious labor dispute on the West Coast since 2003.

About 37% of California’s gross product, or $742 billion, is handled by ports manned by the ILWU, according to a study for the Pacific Maritime Association, which represents ocean-going shipping lines and the companies that load and unload cargo at port terminals. Daily port operations contributed $2.1 trillion to the U.S. economy, or 12.5% of the gross national product in 2013, the study found.

(Click Here for details about VW certifying a second union in Tennessee.)

Labor disputes have become more common at West Coast ports in the past couple of years, but the ILWU was the only union with the power to shut completely major ports such as Los Angeles-Long Beach, Oakland or Seattle-Tacoma, which are the landing ports for the vehicles exported to the U.S. from Asia.

In a recent letter to members, McKenna said a “last, best and final” offer included maintenance of nearly no-cost health coverage, an $11,000 increase in the maximum pension benefit to $91,000, and a $1-per-hour wage increase over each of the five years.

(To see more Cadillac’s appearance during the Oscars, Click Here.)

The union appeared satisfied with the economic package, with some modest adjustment, but had other non-economic demands it wanted satisfied before signing off on a tentative agreement. Though dockworker wages vary by job and skill level, the average exceeds $50 per hour, according to the maritime association.