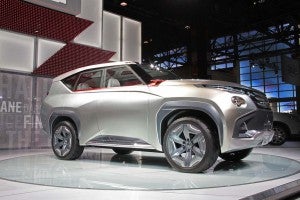 The Mitsubishi Grand Cruiser – Plug-in Hybrid Vehicle is an advanced take on an Outlander-style SUV.

Aiming to prove it has come back from the brink, Mitsubishi has been rolling out an assortment of production and concept vehicles in recent months, and it takes a look into a possible future with the Chicago Auto Show debut of its GC-PHEV.

That’s short for Grand Cruiser – Plug-in Hybrid Vehicle, an advanced take on an Outlander-style SUV that adopts a host of digital technologies, including an “augmented reality” windshield and plug-based all-wheel-drive system.

The exterior of the full-size Mitsubishi Concept GC-PHEV features aggressively creased sheet metal that gives it a foreboding, almost sci-fi look which, the maker claims, is meant to “look as though a master craftsman chiseled it by hand out of a single block of granite. Paradoxically, the Concept GC-PHEV’s form was carefully designed to include aerodynamic enhancing features throughout its exterior to minimize energy wasting parasitic drag.”

Moving away from the recent trend towards ever-larger headlights, the narrow headlamps rise above the LED daytime running lights, framing a front grille that cascades down to the lower fascia. Active louvers open only when the engine needs cooling, otherwise remaining closed to improve aerodynamics. 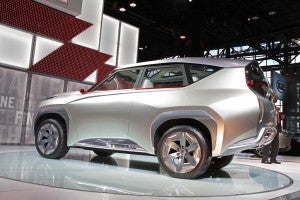 Under the tall hood, the Concept GC-PHEV pairs a supercharged 3.0-liter V-6 engine with a high-output electric motor. Together, they produce a maximum 335 horsepower through an eight-speed automatic transmission. Power is directed, as needed, through Mitsubishi’s Super All-Wheel-Control AWD system.

The electric motor draws power from a 12 kWh lithium-ion battery neatly tucked away beneath the rear cargo floor. The system shares many of its components with the Japanese maker’s pure battery-electric vehicle, the Mitsubishi innovative Electric Vehicle, more commonly known as the i-MiEV.

Unlike the so-called “soft-roaders” that have become increasingly common these days, Mitsubishi claims the GC-PHEV would not sacrifice its “outstanding performance and tractability in even the most daunting terrain and road conditions.” 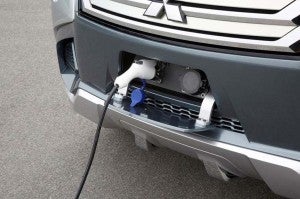 The plug-in powertrain automatically switches between pure battery and hybrid modes depending upon driving conditions it experiences.

The plug-in powertrain automatically switches between pure battery and hybrid modes depending upon driving conditions. In hybrid mode, the supercharged V-6 does most of the work, the electric motor kicking in when an extra boost of power is needed.

You need to step inside to check out some of the Mitsubishi Concept’s most unusual features, its augmented reality technology AR Windshield and touchscreen-based Tactical Table connected car information system.

Before you even sit inside the swivel seats, though, you will discover the B-pillarless design makes it especially easy to slip in or out of the GC-PHEV. 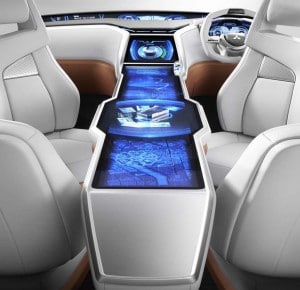 Once inside, you can’t miss what Mitsubishi has dubbed its “Tactical Table,” which fills the space between the four seats – and looks like it has been lifted out of the latest Star Trek series. The touchscreen system is designed to “make connected car technology an interactive experience” for everyone in the cabin.

For those who might not actually want to talk to a fellow passenger, a Mitsubishi backgrounder explains, “The Tactical Table provides an advanced means of two-way communication between the vehicle’s occupants, whether assimilating information for a road trip or having fun through its advanced infotainment features.”

Simply placing a smartphone on the table allows occupants to share or collect information from others onboard.

The system goes a step beyond current Head-Up Display, or HUD, systems and can provide a wealth of useful vehicle information right in the driver’s line of sight, including:

The GC-PHEV is also watching the driver, using sensors that detect posture, eye blinks and other cues that might indicate a driver is growing drowsy, in which case it will sound an alert.

The Concept GC-PHEV adds a host of other safety features, including Forward Collision Mitigation and Active Cruise Control.

(To see what Kia is teasing for the Geneva Motor Show, Click Here.)

While the GC-PHEV likely won’t see production, a number of the features on the vehicle, such as the plug-in hybrid driveline very well could show up on one of the maker’s vehicles in the not-too-distant future.