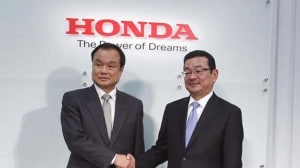 Honda’s ongoing airbag problem has claimed another victim. In this case, it’s President and CEO Takanobu Ito, who will step aside in April, at the end of the automaker’s fiscal year.

Honda has been forced to recall millions of vehicles around the world due to problems with faulty airbags supplied by close ally, the Japanese partsmaker Takata. But Honda has run into a number of other issues and earlier this month scaled back its earnings forecast for the rest of the year.

Ito will be replaced by Takahiro Hachigo, currently Honda’s managing officer. During a 33-year career, Hachigo helped guide the maker’s business ventures in China, Europe and the U.S. Among other things, he led the development of the popular Honda Odyssey minivan built in one of the maker’s many American assembly plants.

In a statement that notably did not mention the company’s airbag problem’s, Honda said Ito “will remain on the board and assume the post of Director and Advisor to Honda Motor.” That, and a number of other executive changes will be subject to a vote by the maker’s board of directors.

The list of manufacturers impacted by Takata’s airbag problems is a virtual industry Who’s Who and. so far, 17 million vehicles have been recalled around the world. But Honda has been more closely tied to Takata, part of its intertwined keiretsu network of suppliers, and hammered by the largest recalls.

At least five deaths have been linked to faulty Takata airbags - along with the recall of 17 mil vehicles.

So far, at least five deaths and dozens of injuries have been linked to the problem – which can see Takata airbags misfire when triggered by a crash, spewing shrapnel into the passenger compartment.

Complicating matters, Honda was last year fined $70 million by the U.S. safety regulators – the largest fine ever handed an automaker – for failing to report more than 1,700 complaints related to vehicle crashes, some of them involving passenger fatalities.

The cost of the recalls has been significant, so far running up to an estimated $255 million, or 30 billion yen. For the latest quarter, Honda earnings fell 15%, to $1.2 billion. And earnings for the full fiscal year, which ends March 31st, are now expected to be down 5%, to $4.6 billion, or 545 billion yen. Shifting exchange rates actually have been propping up what would be much worse numbers.

The crisis has also tarnished the reputation of a company traditionally hailed for producing safe, high-quality products.

But Honda has been facing other challenges, including weak sales in both the Japanese home market and in China where a political dispute between the two countries has had a serious impact on all Japanese makers.

While Ito has faced mounting criticism in recent months, Monday’s announcement came as a surprise nonetheless. The outgoing CEO had taken a very aggressive approach to dealing with other issues facing Honda. Among other things, he ordered a major transformation of the company’s powertrain line-up, launching the so-called Earth Dream family, including downsized turbo engines and an assortment of new hybrid systems.

Even there, Honda ran into some trouble. Dealing with its airbag and other quality issues created internal problems that will delay the launch of the maker’s new FCV fuel-cell vehicle by at least a year.

Traditionally seeing itself as an engine company, Honda has a broad range of products beyond its well-known automobiles, including generators and lawn mowers. It recently moved into the final stages of testing its first business aircraft, the HondaJet.

Ito hired on with Honda in 1978 as a chassis design engineer. He was promoted to president and CEO in 2009. The company has traditionally put an emphasis on promoting engineers into senior positions, and Ito’s replacement joined Honda in 1982 in automotive research. Between 2004 to 2006 Hachigo was the senior vice president for Honda R&D Americas, a point at which the maker was giving increased power and autonomy to product development operations in key markets, such as the U.S.

The shake-up in management doesn’t mean Honda’s problems are over. The U.S. government last week announced a $14,000 a day fine against Takata for failing to provide documents demanded by the National Highway Traffic Safety Administration. The ongoing probe could lead to further recalls and fines. Honda is also expected to face a series of legal challenges involving motorists injured or killed by faulty airbags.

(For more on the latest developments in the Takata case, Click Here.)

Despite the potential damage to its image, Honda is still forecasting sales for the current fiscal year will climb to 4.45 million, up from 4.3 million during the 2013 fiscal year.