UK wants to take a lead in self-driving technology. 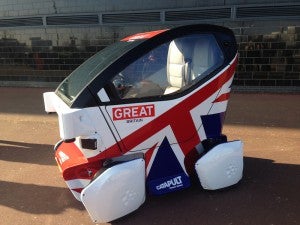 Backed by nearly $30 million in government funding, Great Britain will test out four different types of self-driving vehicles, including this pod-like microcar.

The U.K. has launched an ambitious autonomous vehicle test program in four cities across the country, a project that could put Britain in a leadership position in what many believe will be one of the most important automotive technologies to emerge since the invention of the internal combustion engine.

The project, backed by nearly $30 million in government funding, will test out four different types of self-driving vehicles, including a pod-like microcar and another that looks like an oversize golf cart.

While “still in the early days,” British Transport Minister Claire Perry called the project “an important step. The trials present a fantastic opportunity for this country to take a lead internationally in the development of this new technology.”

Autonomous driving has become a major target for automotive planners and safety proponents alike. The general consensus is that such vehicles could greatly reduce traffic congestion, improve fuel economy and significantly reduce highway deaths. Some experts go so far as to predict that with the advent of autonomous vehicles virtually all highway fatalities could be eliminated. 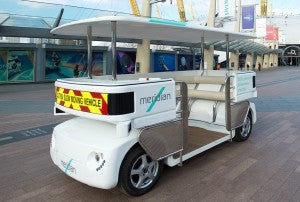 Britain is testing four autonomous vehicles, including this one that resembles an over-sized golf cart.

Several recent studies have also suggested that the vast majority of vehicles sold worldwide by 2035 will have at least some autonomous capabilities – generating as much as 900 billion pounds in revenue, or nearly US $1.4 trillion, according to British business secretary Vince Cable.

(Top-secret Apple project Titan could be aimed at launching autonomous vehicles. Click Here for the story.)

The British pilot program will be spread out in the cities of Coventry, Bristol, Milton Keynes and Greenwich. In the latter community, eight self-driving golf cart-like shuttles will drive a route by the city’s O2 Arena. The

A small two-seater will go into operation in Milton Keynes between the town’s railroad station its main shopping center. Tucked away behind the front seats, a Macbook Pro will track the vehicle’s operations using a series of sensors that will also be used to create detailed, 3D maps of the route.

But for the big Union Jack on its doors, the pod might be confused for the little Google Cars that the high-tech maker has begun testing around its Silicon Valley headquarters. But an official with the local transport system said it is expected to have come in at “magnitudes lower cost” than the Google vehicle. It also will retain a steering wheel and, initially, a driver who can take over operations, in an emergency, during the first part of the test.

(American motorists are ready for autonomous vehicles and willing to pay for them, says study. Click Here for more.)

Despite the ambitious timetable laid out by some autonomous vehicle proponents, participants in the British project cautioned that self-driving vehicles are far from ready to start rolling off of industry assembly lines.

“With driverless cars, everyone imagines you tap in your destaination, sit back and read the paper and off you go,” said Steve Yianni, chief executive of the Transport Systems Catapult overseeing the Milton Keynes portion of the project. “We’re about 10 years from that,” he told the British newspaper, The Guardian.

The four tests will be on slower-speed access roads and walkways. By this coming summer, the government wants to lay out guidelines for more ambitious tests on public roads. That should happen before the end of the decade, though officials question whether the public would see fully autonomous vehicles reach British showrooms until 2030.

Whether that would allow the country to gain a leg up is questionable. Google hopes to soon have 100 of its little pod cars in operation, albeit at maximum speeds of only around 25 mph. The tech giant recently announced it doesn’t want to build its own vehicles but would seek one or more partners to help commercialize the technology.

(Google may be readying an autonomous vehicle challenge to ride-share firms Uber and Lyft. Click Here for the story.)

Several other Silicon Valley firms may join in the race, including Tesla Motors, the battery-car company now working on its own autonomous technology. As TheDetroitBureau.com today reported, Apple also may be moving forward on a top-secret project reportedly called Titan.

Traditional automakers have also entered the fray. General Motors plans to introduce a semi-autonomous SuperDrive system on its upcoming CT6 flagship sedan in 2016. And Nissan has laid out a goal of having its first fully autonomous vehicle in production by 2020.

Whether Nissan – or its competitors – can meet that ambitious target remains to be seen. But experts caution there are huge technical challenges before autonomous driving will be considered safe and reliable enough for the public.