Verizon Wants to Connect Your Car 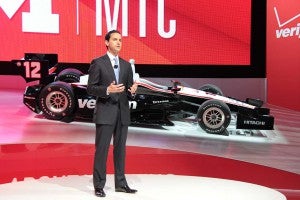 Most of the vehicles Chevrolet will sell in the U.S. this year will be equipped with 4G WiFi connectivity. Mercedes-Benz has made its connected mbrace emergency call system a standard feature. And there’s a growing list of competitors offering similar connected car technologies.

But what about the more than 200 million vehicles now on the road not equipped with some sort of built-in connectivity? Verizon thinks it has the answer, the telematics giant announcing plans to launch the new Verizon Vehicle system. The aftermarket system will be able to perform a variety of services, from alerting a driver to potential engine problems to helping police track a stolen vehicle.

“Over 200 million U.S. drivers on the road today have vehicles that lack telematics and connectivity,” noted Andres Irlando, CEO of Verizon Telematics. The goal of the new system is to “bring the benefits of connected cars to millions more people.”

The underlying technology is surprisingly elegant. It requires an owner to attach a small electronics module to the onboard diagnostic port – or OBD II – that’s on all vehicles sold in the U.S. since 1996. It captures and analyzes the flood of data that can be used by mechanics to diagnose vehicle problems – such as what that unexplained “Check Engine” light actually means.

Verizon data shows that 8% of drivers routinely drive with that warning indicator lit, without knowing whether it’s a minor glitch or a more serious problem that could result in a breakdown or worse.

The module captures data from the OBD II part and transmits it via a cellular connection to Verizon’s servers where it is automatically analyzed. If there is a problem, an alert is sent out by text, email or through a special smartphone app.

“You get the confidence of knowing what that little light means,” said Erik Golden, President of Verizon Telematics.

Like the Mercedes mbrace and General Motors OnStar system, Verizon Vehicles also can be used to call for help in an emergency. A Bluetooth-enabled speaker mounted on the sun visor allows for a voice connection, so a motorist can speak to a live operator – or to an ASE-certified mechanic who can remotely diagnose a vehicle problem.

The connected vehicle system also can issue alerts when routine maintenance is needed. And the subscription-based service also offers its users discounts on travel and vehicle maintenance.

A total of more than 9,300 vehicles now on the road can use the Verizon Vehicles system, the critical link being the availability of an OBD II diagnostics port.

The service will go for $14.95 a month, or $179 annually. It was introduced during the North American International Auto Show’s media days, and will be offered on a pre-release test during the public days of the show. It then will roll out nationwide, according to Irlando, who noted that motorists do not have to sign up for Verizon service on their cellphones to subscribe to the new connected car service.