New Cayenne and Targa rolling out for 2015. 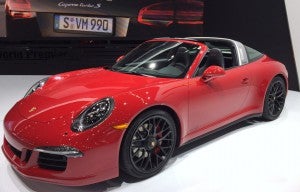 Somewhere Porsche executives are trying to make sure that the OPEC leader they sent a Christmas card to last year stays on the list this year as sales of non-gas sippers are on the upswing as consumers enjoy the low fuel prices.

It makes it the perfect time for the German sports carmaker to roll out two new models that chew up fuel as quickly as they do miles: the mind-numbingly fast 911 Targa 4 GTS and the sport SUV that began the craze,the 2016 Cayenne Turbo S.

The 911 Targa 4 GTS is sort of a convertible and sort of not, but it’s definitely fast and even more so in its latest iteration with an additional 30 horsepower boosting the 3.8-liter flat six to 424 hp. In real terms: zero to 60 in just a tick under 4.3 seconds. All that power gets transferred to all four wheels with standard all-wheel drive.

In GTS mode, it goes from being fast to looking faster and performing better with upgrades like an adaptive suspension, sport exhaust, 20-inch Turbo S black wheels and Sport Chrono package. It also gets special mirrors, chromed exhaust pipes and GTS logos on the door. 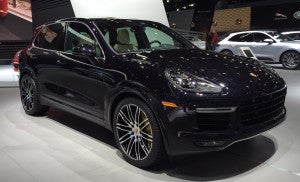 The 2015 Porsche Cayenne Turbo S turned in a new-record time on North Loop of the Nürburgring: 7:59.74 minutes.

On the interior, it’s trimmed with black Alcantara and features GTS logos on its Sport Plus Seats. Porsche said it’ll hit German dealers in early Spring, but when it hit U.S. shores – and what it’ll cost on arrival – hasn’t been determined yet.

(Click Here for details on the all-new Acura NSX.)

Like the Targa, the Cayenne gets a power boost for this year. The new Turbo S gets a biturbo 4.8-liter V-8 makes 570 horsepower and 590 pound-feet of torque, launching from 0 to 62 mph in just under four seconds with a top speed of 175 mph.

That bodacious powerplant gave the maker a reason to brag: turned in a new-record time on North Loop of the Nürburgring: 7:59.74 minutes. It bested the previous time of 8:14 set earlier this year by the Land Rover Range Rover Sport SVR. The Cayenne Turbo S will be launched in the United States in late-April 2015 and will cost $157,300, not including the $995 destination charge.