The current Nissan Leaf is due for a redesign and new battery pack in two years.

Nissan is planning to launch a new version of its Leaf battery-electric vehicle about two years from now, and it will offer a “high-output” version that should deliver 200 miles or more of range.

That would roughly double the current Leaf’s battery range – and put it up against the Chevrolet Bolt, the new 200-mile pure battery-electric vehicle General Motors announced on Monday during the opening day of media previews at the North American International Auto Show.

“We want to be competitive,” Ghosn said during a conversation following a media briefing, quickly adding, “It may have even more range.” 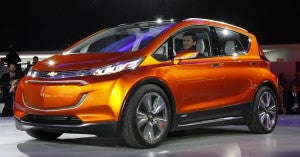 The Chevy Bolt, if produced, would cost about $30,000, the automaker said. Photo credit: Len Katz.

Critical is the fact that the next version of the Leaf will use more advanced lithium-ion batteries that will be smaller, lighter and hold significantly more power. The upcoming Volt refresh will see only modest styling changes, according to Nakamura. But the more significant fact is that Nissan expects to be able to get that added range without compromising the current Leaf’s passenger and cargo space.

Leaf is currently the world’s best-selling electric vehicle, and Ghosn intends to keep it that way. It has, in fact, gained volume despite the recent plunge in fuel prices. A number of other competitors, notably the Chevrolet Volt, have seen sales slide. Chevy hopes to reinvigorate demand for its plug-in hybrid with the update it is debuting in Detroit – alongside the new pure battery-electric Bolt.

When asked if he was worried about having so many new competitors in the electric vehicle space, Ghosn demurred, insisting he actually welcomed the competition.

(Click Here for details about the reborn Acura NSX.)

“We shouldn’t worry about who we are competing with. We should worry about increasing the share of the market” overall that plug-based vehicles capture, said Ghosn, now barely 1%.

Industry analysts say several factors have been holding back sales of plug-based vehicles, including high prices, limited range and long charging times. The latest generation of batteries have reportedly dropped sharply in price – from an industry average $1,000 a kilowatt-hour just a few years ago, to around $400 or less today.

(To see more about the Chevy Bolt concept, Click Here.)

The next challenge is range. The fact that it can offer a nearly 300-mile model of the Model S has apparently helped spur demand for the Tesla Model S despite its hefty price tag, which can top $100,000 in some versions.

“You can expect (our) EVs will only get better,” Ghosn said during his Detroit news conference. “They are going to get more affordable and more competitive.”

(Portions of this story first appeared on DetroitNews.com.)