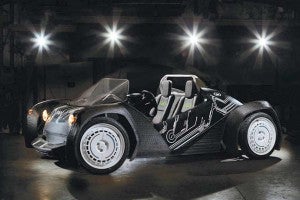 Local Motors is 3D printing one of its Strati cars at the North American International Auto Show.

Most automakers are content to show their vehicles at the North American International Auto Show – which opens up to the public this weekend. But the folks from Local Motors has been building vehicles on the show floor.

The start-up brought some of its 3D printing technology to Detroit’s Cobo Hall to demonstrate how it can produce one of its models, the electric Strati, just about anywhere, directly from a digital file. The first of these battery cars will go on sale later this year.

Don’t expect Local Motors to print out a car in your garage. The company is currently operating two micro-plants, one in Phoenix and the other in Las Vegas. But it is confident enough about its future that it expects to add additional facilities in Washington, D.C., and Knoxville, Tennessee.

The choice of Knoxville reflects a new alliance between Local Motors and the Oak Ridge National Laboratory focused on improving the company’s virtual manufacturing technologies.

The basics of 3D printing, also known as stereo lithography, have been around for more than a decade. A computer guides a laser beam as it flashes into a pool of liquid or powdered materials, fusing them into solid objects, one pixel and one layer at a time.

A number of automakers already use the technology to produce prototype parts, but Local Motors is going the next step, actually producing a full vehicle body. After printing out the body, chassis and much of the interior, it assembles the remaining components, including the suspension, wheels and tires, and the powertrain.

All told, company co-founder John “Jay” Roger, Jr. says its vehicles consist of just 50 components, rather than the thousands used in a conventional vehicle.

Where a traditional automobile is put together, piece by piece, on an assembly line that can be miles long, snaking through a plant that might cost as much as $1 billion to erect and tool up, Local Motors is using compact facilities a fraction of the size and cost.

“Micro-factories are a great counterpoint because they employ an economy of scope by taking advantage of low cost tooling and co-creation,” commented John Rogers, co-founder of Local Motors. “Resulting in the ability to get products to market faster and in less time while using less capital to find a winning concept.”

One of the other advantages of the 3D process, company officials noted, is that they can readily tweak the design of their vehicles.

A major downside is the time it takes to print a body – about 40 hours. A conventional vehicle usually requires less than 20 man-hours during the assembly process.

Depending on features, Local Motors plans to charge between $18,000 and $30,000 a vehicle when it starts selling the first Strati model later this year.

The life of an automotive start-up is precarious, and only a handful has ever made it work as niche players. But if all goes according to plans, Local Motors hopes to open as many as 100 regional micro-plants before the end of the decade.

(Verizon wants to connect your car. Click Here for more on its new safety and security telematics service.)