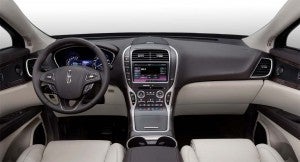 The new car smell that Americans love so much, isn't well liked by the Chinese, which caused Lincoln some problems with the new MKX.

While the development of a new vehicle is a team effort, but at some point every bit of a car eventually falls into the hands of engineers.

“We are focused on delivering engaging and refined luxury vehicles with innovative and thoughtful technologies,” said Kumar Galhotra, president of Lincoln, during the unveiling of the MKX at the North American International Auto Show. “The all-new Lincoln MKX reflects that focus.”

In the case of the new MKX, engineers were faced with an unusual problem: interior odors.

“Americans love that new car smell. But the Chinese don’t,” noted Ford’s Chief Executive Officer Mark Fields said, which presents a problem since the MKX, which goes on sale first in the United States this fall, but soon after in other market, including China, Canada, the Middle East, Mexico and South Korea.

However, the Chinese customers Lincoln is trying to win over literally turn up their nose at it.

Galhotra said in order to satisfy Chinese customers, Ford commissioned an extensive research project to figure out what smells offended them and which ones they actually found to be pleasing.

“The smell has many components from the plastics and the leather and other things,” Galhotra told reporters. The objective was to strike the right balance and Lincoln hopes it has reached a solution to the problem.

After years of planning, Ford Motor Co. began selling the Lincoln brand in China again in 2014. Lincoln now has nine active dealerships in China and so far the sales have been running ahead of expectations. The goal is to have 25 dealers in operation by the end of 2015 and a total of 60 Lincoln dealers operating in China by the end of 2016.

However, Ford, unlike its cross-town rival General Motors, has no plans to build Lincoln models in China. Thus, the MKX will be exported to China from a Ford assembly plant in Oakville, Ontario.

GM, on the other hand, does build Cadillac models in China and is in the midst of expanding its production capacity to encompass the build of its new Cadillac CT6 later this year.