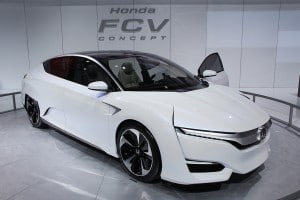 After a being delayed due to the Takata airbag problem, FCV production will start next year. Photo credit: Len Katz

Honda’s much ballyhooed fuel cell vehicle, the aptly named FCV, made its North American debut today at the Detroit Auto Show. The car is slated for production sometime next year and will hit showrooms in late ’16 or early ’17.

However, the Japanese automaker seems more focused on a bigger picture here in the Motor City. It’s calling 2015 “The Year of Honda.” While it seems awfully presumptuous on the surface, the company has reason to be excited: it’s long-awaited Honda Jet is finally getting off the ground, the FCV overcame some hurdles – including being impacted by the Takata seat belt fiasco – to finally find city streets and Honda is returning to Formula One racing.

“No other automaker in the world has the depth of R&D know-how and experience to create such a diverse array of advanced technology products, let alone bring them to market,” said John Mendel, executive vice president of American Honda Motor Co., Inc.

“These all-new products and technologies represent significant advancements for our customers and for the future of mobility everywhere; innovations that only a comprehensive mobility company like Honda can truly achieve.” 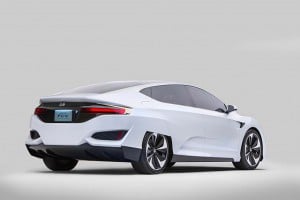 The FCV is one reason why the company is calling 2015 "The Year of Honda."

Perhaps the event most germane to the early part of the year is the declaration that the FCV will go into production in 2016. The vehicle’s launch was delayed as the automaker had to pull many of the engineers working on FCV off the car to help resolve the mess involving Takata’s exploding airbags.

Honda was the first automaker to commercially offer a hydrogen-powered vehicle, offering a limited number of leases for the FCX fuel-cell vehicle in late-2002. In the U.S., the fuel-cell vehicles was limited to a small number of dealers in Southern California, the only part of the country where hydrogen was commercially available.

Fuel-cell technology began to fall out of favor later in the decade, attention shifting to battery-electric technology. But hydrogen has begun regaining interest, in part due to the limits of lithium-ion batteries, notably their high cost, limited range and long charging times.

Hyundai began offering a fuel-cell version of its Tucson sport-utility vehicle last summer, and Toyota is launching its new Mirai model in Japan this month, with U.S. sales set to begin in mid-2015. Honda had also hoped to be back on the market with a production version of the FCV Concept about the same time.

In addition to the FCV, Honda also announced it plans to introduce an all-new battery electric vehicle and an all-new plug-in hybrid vehicle by 2018 plus expanded applications of the maker’s two- and three-motor hybrid systems, “as part of the next phase of Honda’s commitment to advanced powertrain technologies that enable ultra-low carbon mobility.”

Additionally, it will launch the all-new 2016 HR-V crossover this spring and a fully redesigned Pilot eight-passenger SUV during the summer. Those will be followed by a new Ridgeline pickup truck in 2016.