Automakers make big gains despite recall woes, according to IIHS. 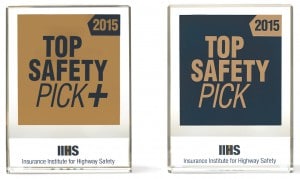 The number of vehicles earning one of the top two ratings from the Insurance Institute for Highway Safety has nearly doubled for 2015.

The number of vehicles earning one of the top two ratings from the Insurance Institute for Highway Safety has nearly doubled for 2015 despite the industry’s ongoing recall problems.

A total of 71 vehicles have earned either a Top Safety Pick or Top Safety Pick+ award, the insurance industry research arm announced Tuesday, up from just 39 models during 2014. And that’s despite making it tougher to earn the top rating.

“This is the third year in a row that we are giving automakers a tougher challenge to meet,” said IIHS President Adrian Lund, who stressed that the industry is “greatly improving” its crash protection.

That’s at both the passive level – in terms of improved vehicle crash structures – and with the new active safety systems designed to prevent a crash in the first place.

The news might come as a surprise to some American motorists considering that the U.S. auto industry will end the year have recalled more than 60 million vehicles, nearly double the previous peak. But Lund said that shows the industry is trying to address the growing focus on safety.

And while some recalls have been linked to deadly problems – 42 fatalities so far blamed on General Motors’ faulty ignition switches – the reality is that highway death rates have been falling sharply. The latest fatality numbers are down about 40% from their 1970s peak, even though there are significantly more vehicles on the road traveling far more miles.

Last year actually saw the number of “safest” vehicles dip a bit as the IIHS increased its standards. Notably, a number of 2014 models failed to meet the new small overlap crash test designed to simulate what happens when a vehicle hits a pole or barely clips another vehicle head-on.

Automakers have been racing to meet that new test, Honda among those who were able to pass with the 2015 remake of its CR-V crossover-utility vehicle. Honda had the second-highest tally overall, with 10 models falling into one of the two categories.

Rival Toyota landed the most vehicles in the latest IIHS report’s Top Safety Pick+ category, eight of its models overall. Toyota also landed four more in the slightly less demanding Top Safety Pick category. The Japanese giant showed some significant improvements in the latest round of IIHS crash tests. Its popular Prius “was one of the worst performers ever in the small overlap test,” noted an IIHS release. This year, however, the hybrid was improved enough to earn a Top Safety Pick+ award.

Detroit makers had 10 Top Safety Picks, including five from General Motors. But Chrysler was the only domestic to earn a Top Safety Pick+ rating, that for the new Chrysler 200 sedan.

Improved crashworthiness helped a number of vehicles improve their standing in the latest IIHS rankings. But the Insurance Institute also highlighted the growing number of vehicles now equipped with frontal crash prevention systems – whether as standard or optional gear. Most of the “Plus” winners now offer that technology.

Some of those systems simply alert a driver to a potential collision, but, “Systems that don’t require a driver response to avoid or mitigate a crash have the most potential for reducing crashes,” said IIHS chief Lund.

(To see why conventional gas-powered cars will be the minority by 2017, Click Here.)

Significantly, the 71 vehicles ranked at the top of the IIHS list represent a wide range of cars, trucks and crossovers, from some of the smallest vehicles on the road to some of the largest.