Google's self-driving car took another step toward reality as the company used prototypes to give a focus group a few test drives.

Christmas came a few days early for the folks developing Google’s Self-Driving Car as they rolled out working prototypes of the car for people to test drive…or in this case, test ride.

The company released a photo as well as a video titled “A First Drive” featuring of a variety of folks getting a chance to go for a spin in the cars.

“It was cool,” said a woman named Thida in the video. “It was kind of a space age experience.”

This is really a second debut for the cars. Google showed off non-functional versions in May, but the project team has been busy since then. 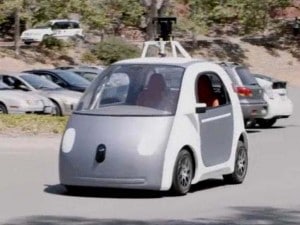 The Google driverless prototype introduced in May did not work.

“We’ve been working on different prototypes-of-prototypes, each designed to test different systems of a self-driving car – for example, the typical “car” parts like steering and braking, as well as the “self-driving” parts like the computer and sensors,” the company said in a statement.  “We’ve now put all those systems together in this fully functional vehicle – our first complete prototype for fully autonomous driving.”

That said, the cars do not look dramatically different than what was shown earlier this year. On the inside, the interiors are pretty sparse, but they look relatively comfortable with plenty of room for two passengers. They also feature manual controls that allow the cars to be driven “off the grid.”

Google plans to continue shaking out the cars on its test track and then move to the streets of Northern California. Chris Urmson, director, Google Self-Driving Cars, said putting people in the vehicles represents tremendous progress in a short time.

“It was a big decision for us to go an start building our purpose-built vehicles,” he said in the video. “Really, they’re prototype vehicles. They were a chance for us to explore what does it really mean to have a self-driving vehicle. But in the small amount of time we’ve been working on it and we have functional prototypes. It’s exciting.

“This is a first step for us and it’s really exciting to see the progress we’ve made. The opportunity for people to just move around and not worry about it, it’s going to be incredibly empowering and incredibly powerful for people.”

The test group featured a diverse set of people ranging from a young boy to senior citizens to a blind gentleman named Steve, who agreed with Urmson: a self-driving vehicle would open a whole new world for him.

“Our lives are made up of lots and lots of little things. And a lot of those little things for most people involve getting from place to place,” he said in the video. “In order to connect and do things and be with people and go places that they need to go and do things. So there is a big part of my life that’s missing. And there is a big part of my life that a self-driving vehicle would bring back to me.”

(Click Here for details about high-tech safety features drivers want in their cars.)

Virtually every major automaker is working on some form of autonomous driving system. Toyota sees the technology as a way to assist drivers – who would remain in control – while Japanese rival Nissan plans to have a fully self-driving vehicle on the road by 2020. Cadillac, meanwhile, plans to introduce its SuperDrive system on the planned CT6 flagship sedan in 2016, but it will only allow hands-free driving on limited access highways.

Only 29% of those surveyed by AutoPacific, Inc. said they would want to eventually own an autonomous vehicle. Among those who wouldn’t want one, four out of five said they simply prefer to drive themselves. About half cited liability issues, with an equal number concerned the technology would simply be too expensive. Others raised questions about reliability, safety and the cost of repairs.

As to those who would want to own an autonomous vehicle, seven out of 10 said they like the idea of being able to relax while driving, 66% saying they expect the technology to improve highway safety. Reducing stress and improving fuel-economy were other factors, while more than one in three said they would like the opportunity to be able to work or multi-task rather than having to focus on driving duties.