Safety may remain the big story in 2015. 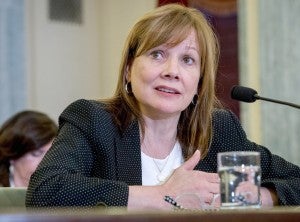 When 2014 opened, the year’s top automotive story seemed likely to be Mary Barra, General Motors’ new chief executive, and the first female CEO of a major automaker. As the year draws to a close, Barra is, indeed, still in the headlines, but enmeshed in what has turned into the year’s biggest story.

GM’s February recall of 2.6 million vehicles due to faulty ignition switches has so far been linked to more than 40 deaths. But in recent weeks, that’s nearly been eclipsed by the Takata airbag crisis that has so far led to the recall of more than 10 million vehicles and counting – federal regulators pressing to expand the service action nationwide.

But those are only two of the many safety issues that have led the industry to recall about 60 million vehicles this year, nearly twice the previous record set back in 2004. The question is whether recalls will remain the big automotive story for 2015.

An admittedly unscientific survey of industry leaders suggests that the coming year likely will continue to see automotive safety stay in the headlines – in part due to the naming of a new administrator for the National Highway Traffic Safety Administration. During Senate confirmation hearings, Mark Rosekind said he intends to be the “enforcer,” promising to get even tougher when it comes to recalls and other safety lapses.

That said, the general consensus is that the number of overall recalls will likely not set another record. GM and other manufacturers spent 2014 aggressively addressing a backlog of safety-related issues, empty their closets, so to speak.

But industry leaders also expect to see more recalls in 2015 than they had, on average, during the prior decade. It’s not that the latest vehicles are developing more problems. It’s just that with an emboldened NHTSA looking over their shoulders, manufacturers expect to announced recalls for problems that, in the past, would have been handled less aggressively – often through so-called Technical Service Bulletins where they would have made repairs only if a customer actually reported a problem.

In some cases, such issues might seem insignificant. Several makers ordered recalls this past year because they had placed inaccurate tire inflation numbers on the placards mounted inside the driver’s side door jam. But “every recall is important,” and can be a matter of life or death, stressed Clarence Ditlow, director of the Center for Auto Safety. He pointed to the more than 200 deaths linked to underinflated Firestone tires that led to numerous rollovers of Ford Explorers at the beginning of the new millennium.

Another trend that industry observers are watching is the growing number of recalls covering older vehicles. Many of the models involved in the GM ignition switch and Takata airbag recalls have been on the road for more than a decade, noted David Cole, director-emeritus of the Center for Automotive Research, or CAR, in Ann Arbor, Michigan.

Automobiles are growing more technically complex every year, and the challenge is to be sure that new, high-tech systems – whether airbag inflators or electronic engine controllers – can stand the test of time.

“It’s very difficult to simulate the impact of vehicle aging when you’re doing your testing,” warned Cole, adding “this is going to be a continuing problem.”

So is the issue of unrepaired vehicles. NHTSA estimates no more than 80% of vehicles covered by a recall are typically brought in for repairs. According to tracking firm CarFax, that means about 30 million vehicles now on the road have some known safety problem that hasn’t been fixed. Under pressure from federal regulators, automakers have been reaching out aggressively to bring more owners in for service, but if past trends hold true, about 12 million vehicles covered by the record recalls of 2014 won’t be repaired.

On the flip side, automakers are developing increasingly sophisticated data mining systems that can track down problems quite quickly – sometimes before the first vehicles actually reach consumers. That’s led to recalls of a number of recent models, including the 2015 Chevrolet Colorado pickup.

The safety story isn’t entirely one of doom-and-gloom. The Insurance Institute for Highway Safety last week released its latest list of the market’s safest vehicles, and the number of models qualifying for the group’s top two awards nearly doubled to 71 for 2015. In many cases, manufacturers addressed serious safety issues of the past. Two years ago, the IIHS reported that the Toyota Prius had been one of the worst performers in its small overlap crash test. This year, the hybrid passed with flying colors, earning a Top Safety Pick+ rating.

(For more on the IIHS “safest cars” report, Click Here.)

What worries some experts is that all the recall headlines could make consumers fear their vehicles. True, says CAR’s Cole, a faulty Takata airbag could be fatal, “but for every person killed by shrapnel” from a faulty airbag, the technology “has saved 100s of lives.” He stresses that today’s vehicles are safer than ever, a position supported by the steady decline in overall highway fatalities.