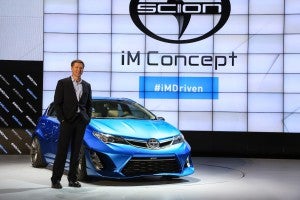 After the reveal of the Scion iM Concept car in Los Angeles, executives confirmed a production version of the five-door compact will be coming to dealerships in 2015.

The iM “concept,” compact hatchback unveiled during the here will morph, with very few changes, into a new production at the New York Auto Show next spring. Nancy Hubbel, Scion spokeswoman, said the decision was made to go ahead and confirm the concept car is intended for production rather than duck the question.

“The two models we’re debuting in New York next spring are just the beginning for Scion,” said Scion Vice President Doug Murtha. “We plan to bring three new products in three years to our showrooms, offering a variety of exciting options for current and new Scion customers.”

The iM concept five-door hatch features aggressive styling that will make the brand less quirky, and more stylish and sporty. The move to bolster Scion, which has been struggling during the past few years, is part of a larger plan that sees Toyota beefing up its Lexus division and pulling off a quick update of Camry.

Scion is supposed to attract young buyers with an independent spirit and desire to stand apart from the crowd. But many of today’s consumers between 18-34 years old also value a degree of practicality to support their self-reliance and more mobile lifestyles, Murtha said.

Faced with greater independence and less disposable income, they value fun and sensibility in a vehicle choice, he said.

The “M” stands for modern, multifaceted and magnetic. Its captivating styling and custom-blended “Incrediblue” paint are complemented by matte silver and gunmetal accents. At the same time, the price will be less than $20,0000, Lexus officials said, making the payments easier to fit into the limited budgets of younger buyers.

The iM Concept has comes with sporty handling and racing inspiration through a wide stance and low ride height for a grounded appearance. It features front and rear bumper overhangs that create dynamic surfaces, as well as geometric grille inserts, deep air intakes and fog lights. Large 19-inch forged alloy wheels sit flush with the body while vented rotors with four-piston front calipers work with the adjustable-height racing suspension.

(To see more about the Lexus LF-C2 and its impact on future designs, Click Here.)

Urban drivers can expect the iM Concept to meet the needs of city streets with excellent fuel efficiency, sporty handling and easy parking. Details on the production version’s transmission, engine, technology and other details will be available in 2015. Pricing information will also be available next year, but Scion anticipates that a price under $20,000 could make this car enticing to youthful customers.