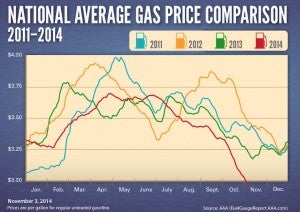 The price of gasoline is expected to continue to fall over the next several weeks as something like an old fashioned price war not seen in nearly 50 years breaks out in the global petroleum markets.

Meanwhile, Saudi Arabia, the world’s largest producer of crude oil, acted just like any other business that’s determined to protect its marketshare, announced a price cut, which is certain to ripple through the world’s oil markets.

The Saudi price cut is something of a tribute to the domestic oil industry, which has now expected to produce something more oil this year than it has in more than 40 years when production of the fields in West Texas began to fall.

The U.S. already is beginning to export relatively small exports of crude for the first time in years.

The big question now is what happens next.

At the beginning of the summer when the terror groups overran a significant part of the Iraqi Army, the conventional wisdom was that the price of oil would spike dramatically. The price of oil did go up briefly but the big price shock never prevailed.

Now experts are trying to guess how low the price of oil might go, given that crude oil was selling for $78 per barrel, according to the Federal Energy Information Administration. T. Boone Pickens, one of the nation’s notable football fans and supporter of natural gas-fired cars, boldly predicted to Bloomberg News that crude oil would not fall below $70 per barrel.

This isn’t an academic question for economists and various pundits and talking heads to chew on.

If oil prices drop below $70 the foundations of the U.S. oil boom begin to shake and crack a bit like the foundation of century-old houses and buildings in California’s earthquake zone. In fact, some analysts believe this is precisely Saudi Arabia’s goal since its oil is a lot cheaper to produce than the fracked oil from the American West.

The fact is that oil, thanks to reduction in OPEC’s clout, is beginning to behave more like other commodities that are open to the vagaries of market demand and boom-bust cycles that seem to prevail in the markets for copper, lumber and iron ore.

The shifts in oil prices also have challenged some elements of long-held conventional wisdom cherished by economists and the talking heads on television.

For one thing, protectionism actually can benefit consumers and the protectionist-oriented limits on oil exports that date back to the 1970s are also helping drive down prices now.

A paper published recently by the EIA noted that for much of the past 40 years, the ban on exports has helped reduce the cost of gasoline for American consumers.

“While crude oil prices matter to those involved in producing oil or refining oil into products, most Americans, and the policymakers who represent and serve them, are mainly concerned with the price of gasoline and other refined products.

“With U.S. gasoline consumption running at 8.8 million barrels per day and the average retail price of gasoline for all grades at $3.58 per gallon, the average American household spent $2,600 on gasoline in 2013.

“Recognizing that the possible relaxation of current export limitations could cause the prices of domestic and international crude grades to move in opposite directions (the former tending to rise, the latter tending to fall) one question of interest to policymakers and the public is which crude prices, domestic or international, matter most to the determination of gasoline prices in the United States,” the paper noted.

In other words if you lift the protectionist oriented export ban on U.S. petroleum disappears, an outcome favored by many policy makers, the price of U.S. gasoline could increase for American consumers. It probably wouldn’t happen right away but it’s one of the possible outcomes of an apparent oil glut that’s driving down pump prices.