Mercedes-AMG Teaming Up with Agusta

German maker returns to its roots. 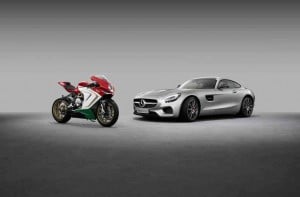 The new Mercedes-AMG GT S and the MV Agusta F3 800 Ago: the best of the new business partners.

Mercedes’s performance division AMG has launched what it’s billing as a “long-term partnership” with Italian motorcycle manufacturer Agusta Motor SpA. The deal will give Mercedes-AMG GmbH a 25% stake in Agusta.

Exactly how the alliance will work remains to be seen – though Mercedes had a previous alliance with another high-performance bike maker, Ducati, before that Italian firm was snapped up by rival automaker Audi. Indeed, Mercedes is given credit for the invention of the motorcycle itself.

“The partnership provides us with an entry into a world of additional high-performance enthusiasts,” explained Tobias Moers, chief executive of Mercedes-AMG, in a prepared statement. The two, he added, “are connected not only by a long and successful racing history, but also by shared values and goals for the future – allowing the experience of utmost perfection, optimal performance and motorsport technology for the road.”

From the Agusta side, a first hint of what might be in store is expected to come at the upcoming EICMA international motorcycle show in Milan, the new partners noted. The joint statement suggested the two makers are likely to find ways to cross-brand products and to use each other to help appeal to “new target groups…all over the world.” 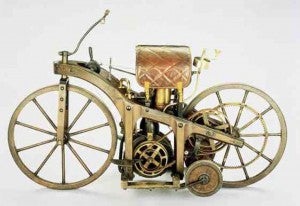 By teaming up with Agusta, Mercedes is returning to its motorcycle roots.

Echoed Giovanni Castiglioni, president and CEO of MV Agusta, “Mercedes-AMG will help MV Agusta to further expand globally and to accelerate our growth. The uniqueness of MV Agusta will further enhance Mercedes-AMG’s leadership in the high-performance segment.”

Based in Varese, in the northern part of Italy, MV Agusta Motor was founded by Domenico Agusta in 1945. It is a small and specialized manufacturer focused on high-design, high-performance motorcycles – such as the Brutale 800 RR and the Dragster 800 RR, both of which compete in the so-called “sports naked” segment. They will be among the new Agusta models to debut at the Milan bike show.

(Click Here for details on how the Ram brand is adding to Chrysler Group’s bottom line.)

Agusta employs just 260 workers at its headquarters on the shores of Lago di Varese, more than a third of them working in R&D.

(Cadillac confirms it’s bringing the ATS-V to the L.A. Auto Show. Click Here for the report.)

One might be tempted to call the AMG-Agusta alliance something of a consolation prize for the German sports carmaker’s parent, Daimler AG. As recently as 2011, it was working with Ducati on various high-performance motorcycle projects. But that partnership was scuttled when Audi unexpectedly purchased the Italian manufacturer outright.

Daimler, it turns out, has deep roots in the motorcycle world. In fact, founder Gottfried Daimler and his chief engineer Wilhelm Maybach filed a patent, in August 1885, for what he described as a “riding car.” It is considered the world’s first motorcycle. They were granted the patent in April of the following year.