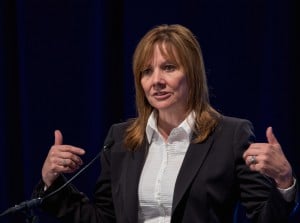 GM CEO Mary Barra believes cutting the number of vehicle platforms used by the maker will cut costs and improve relations with suppliers.

Despite efforts to grow sales in China and expand the Cadillac line, General Motors plans to reduce the number of platforms or vehicle architecture it will support across the globe even as it continues to roll out new vehicles to win over new customers.

The reduction in the number of platforms will give GM a chance to exploit economies of scale and also improve relations with suppliers, GM Chief Executive Officer Mary Barra told analysts during the a meeting at GM’s Milford Proving Ground outside Detroit yesterday.

At the same time, GM will continue to keep its product pipeline filled with new vehicles, she said.

The perception that GM has relatively little to show – emphasized in the influential “Car Wars” study published by Merrill Lynch – now that its new trucks and SUVs such as the Chevrolet Tahoe and Chevrolet Suburban, Cadillac Escalade and Chevrolet Colorado and GMC Canyon have been introduced, is simply wrong, GM officials said.

Mark Reuss, head of GM’s product development, said during the next several months GM will roll out several new products, including revised versions of the Chevrolet Cruze, Chevrolet Malibu and Chevrolet Equinox and a new crossover for Buick that is slotted to slip in between the Buick Encore and Buick Enclave.

GM will also plans to roll out a new Cadillac SRX along with the full-size CT6, the ATS Coupe-V and a new version of the Chevrolet Volt, which will make its debut at the North American International Auto Show in Detroit. The new Volt will feature, among other things, a new interior and employ new battery chemistry, he said. GM is also working on a new battery electric vehicle for the Chevrolet line.

Reuss also explained that GM is moving forward to reduce the complexity of the engineering behind its vehicle line, which will help reduce costs and GM hopes also lead to better relations with suppliers.

Reuss said GM has been re-organizing its vehicle development process. Consequently, in 2015 it will have reduced the number of regional architectures supported by engineering groups in Europe, North and South America and Asia, to 12 and have raised the number of core architectures to 14, which will account for 75% of the company’s global production volume.

By 2020, GM’s strategy call for reducing the number of core products to 11 and for the introduction of two new vehicle sets that can support multiple products and only two regional vehicle architectures. By 2025, the strategy calls for GM to support only four different vehicles sets worldwide. The sets would include front- and rear-wheel-drive architecture for passenger cars and crossovers, separate architectures for sport-utility vehicles and a fourth architecture for trucks.

The vehicle sets would be flexible enough to support multiple vehicles, but include common parts that are critical but invisible to the customers such as the wiring that support a vehicles battery. By making many parts standard, GM will be able to better control quality, Reuss said.

(To see the fastest Corvette ever produced by Chevrolet, Click Here.)

The overall strategy is very similar to those employed by global rivals such as Ford Motor Co. and Volkswagen AG.