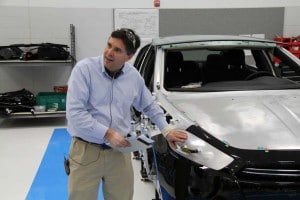 It was announced yesterday that Fiat Chrysler’s American brands – Chrysler, Dodge and Ram – were at the bottom of Consumer Reports’ annual reliability rankings and took a significant tumble from the previous year’s results.

Betts, who had been Senior Vice President of Quality since 2009, will be replaced by Mark Chernoby, who will head quality for FCA, and Matthew Liddane, who will lead quality in North America for Chrysler Group. The appointments are effective immediately.

Betts, a member of the Group Executive Council, joined Chrysler in 2007 after working for Nissan and Toyota.

While Betts officially left for the “other interests,” the maker’s finish in the quality survey isn’t exactly a ringing endorsement. Betts has been in charge of quality for five years and it’s never been among the top quality makers.

In fact, Chrysler’s reliability slipped sharply compared to the 2013 survey, and the automaker’s Italian partner Fiat was at the absolute bottom of the list. Consumer Reports noted that the 500L was the single-most problem-plagued vehicle in its study.

However, all of the maker’s brands slid down in the rankings compared with 2013. Fiat, Jeep, Ram and Dodge were at the bottom of this year’s list of 28 brands while Chrysler ranked 22, down from 18 a year ago.

(Click Here for details about Honda’s jump in earnings.)

Chrysler, in a statement on Monday, said it values customer feedback and uses it to improve its vehicles.

(Takata hit with huge lawsuit – even as airbag recall could triple in size. Click Here for the report.)

“Many of the issues identified in the survey coincided with new product and technology introductions and have already been addressed with vehicles currently in production,” the company said.

One of the reasons for the poor showing was the new Jeep Cherokee four-cylinder is the least-reliable new small SUV on the market.  The Fiat 500L is the least reliable new car in magazine’s 2014 survey, with a reliability score that is 219% worse than average. The smaller Fiat 500 is better, but it still scores poor for reliability, Consumer Reports said.