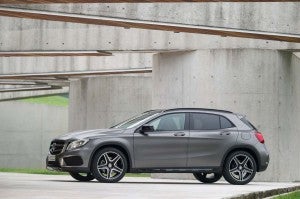 The new GLA is the fifth - and smallest - crossover/ute in the Mercedes family.

What a difference one little letter can make. In many ways, the new Mercedes-Benz CLA and GLA models are a lot alike, starting out with the German maker’s basic small car platform. But there are also a surprising number of ways the two models diverge.

The CLA is the compact, coupe-like sedan that Mercedes launched last year, quickly becoming one of the maker’s most successful products ever, demand so far well exceeding supply. The new Mercedes-Benz GLA adopts a more hatchback-style crossover body style that targets an even larger segment of the luxury market.

But the differences are even more substantial, as we learned during several days of driving the new GLA through northern Vermont just as the leaves began to turn their autumn colors. The year-long delay in bringing the crossover to market appears to have given Mercedes engineers the time they needed to address earlier complaints about the coupe-like CLA’s ride and handling.

The compact or, if you prefer, entry-luxury segment is booming, with a flood of offerings as diverse as the Audi A3 and Lincoln MKC. Unlike past products, such as the ill-conceived Mercedes C-Coupe of a decade back, most of the new offerings actually do carry a luxury cache, with plenty of features and options that upscale buyers expect. 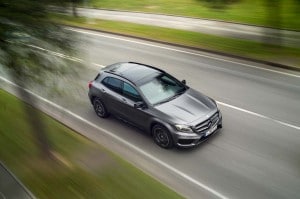 The CLA, in particular, has struck a resonant chord in the market, and Mercedes officials in the U.S. contend they could sell twice as many if they could only get more product from the factory. The GLA, they contend, could be even more of a hit considering the compact crossover segment is roughly three times as large.

A walkaround reveals the 2015 Mercedes-Benz GLA to be a handsome vehicle, although it becomes readily apparent it is more a hatchback on steroids than a traditional ute. Compared to the CLA, it adopts a five-door design that sits taller and rides higher. Broad rear shoulders give it a more muscular look, as do the hood’s twin “power domes” and brush guards built into the GLA’s face.

Other appealing details include the LED daytime running lights and the Mercedes-branded brake calipers.

While it does ride a bit higher off the ground – about 140 mm, or 5.5 inches – no one will confuse the new Mercedes GLA with a Jeep. The maker claims the 4Matic version that will come to market first is capable of some modest off-roading. Take that to mean you’d be able to handle some snow or a rough gravel road rather than a boulder-strewn trail.

Inside, the GLA adopts a layout quite similar to that of the CLA. The dash is covered in a man-made “leather” material, and is topped by a tablet-like video screen, the display slightly larger than the coupe-like sedan’s. One of several versions we drove in Vermont featured an optional leather wrap of the upper dash that was far more striking than the base car and we’d love to see Mercedes opt for it across the line-up. 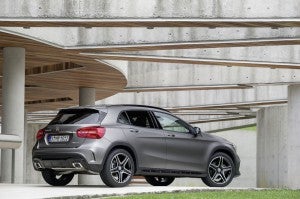 The 2015 Mercedes-Benz GLA is expected to come out on top of a crowded segment.

Seating is comfortable and supportive, and the overall feel fits the luxury market, if the look of the base car is a bit bland. The only complaint taller drivers might have is that the cabin can seem a bit claustrophobic.

Mercedes is offering two different powertrain packages for the new crossover, the GLA 250, with its inline-four engine making 208-horsepower and 258 pound-feet of torque. Paired to a 7-speed DCT transmission, it achieves a best-in-segment 24 mpg in the City, 32 on the Highway, with the EPA giving it a best-in-segment 27 mpg Combined rating.

Performance is adequate, if not exactly brisk, so for those who want a more sporty drive, there’s also the Mercedes-Benz GLA 45 AMG. This package adopts a turbocharged version of the 2.0-liter four-banger that bumps the pony count to 355, while churning out 332 lb-ft of torque. Thanks to several fuel economy-enhancing details, such as standard Stop/Start, the AMG model still can deliver 23 mpg around town, a 29 mpg highway rating and 25 mpg combined.

The 7-speed dual-clutch gearbox has been retuned, as have the suspension and steering, to deliver a tauter, more dynamic driving experience. Off-the-line acceleration is brisk, the GLA 45 AMG claimed to hit 60 in just 4.8 seconds. 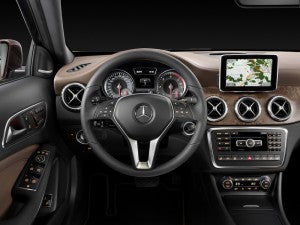 The new GLA features a plethora of advanced safety equipment.

Like the “base” GLA 250, it shares a power liftgate, chrome roof rails and 14-way power front seats with memory. But it also gets a three-stage ESP system, with the driver able to choose between Economy, Comfort and Sport modes. The latter tightens up the throttle and steering, among other things.

The CLA 45 AMG sedan took a number of critical hits for its almost crude ride dynamics. Hitting even modest potholes or roadway expansion joints would jar your spine. Even in Sport Mode, the ride in the GLA 45 AMG is smoother and more refined. That said, it is far more nimble when slicing through the twisted and hilly Vermont countryside than the GLA 250. The base car can handle the corners with reasonable aplomb but still scores low on the fun-to-drive scale compared to the AMG package.

Even the base car offers some welcome technologies, including Adaptive Brakes, Hill-Start Assist and something Mercedes calls Prevention Assist Plus with Autonomous Braking. It’s similar to the Collision Warning with Auto Braking we’ve been seeing on a number of other new models lately. The GLA also features eight airbags and, as an option, such safety features as Blind Spot Detection, and Lane Departure Warning.

(Click Here for details about VW bringing the Phaeton back to the U.S.) 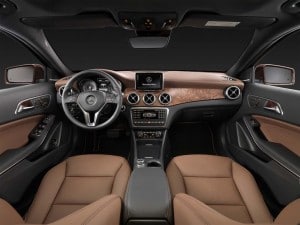 As with the CLA, Mercedes is trying to draw in an all-new buyer to the brand with the GLA model, and price is thus a competitive weapon. The point of entry with the GLA 250 is $31,990 – all the more appealing considering that is for the 4Matic edition. The two-wheel-drive package won’t reach U.S. shores until next year.

The GLA gets a revised 4Matic system that starts out by putting all power to the front wheels with the 250 version. To maximize grip, as much as 50% of torque can be shifted to the back tires. The AMG model balances power, front-to-back, to enhance launch performance. It also enables torque vectoring to help steer you more smoothly through the corners – something that was readily apparent during our Vermont drive.

The AMG edition nudges the price tag up substantially, to a $48,300 starting figure. But don’t let loss-leader numbers confuse you. Mercedes actually expects the typical GLA 250 buyer to shell out around $37,000, while the typical GLA 45 AMG transaction price will likely be in the $56,000 to $58,000 range. And add $925 in delivery charges to all these numbers.

(To see why September’s auto sales are so strong, Click Here.)

Is the 2015 Mercedes-Benz GLA worth the price? Buyers should be cautioned to not be drawn in by the loss-leader numbers. If you buy a new Mercedes GLA you’ll likely wind up spending a lot more than the advertised numbers. And that means you should consider a fair number of other alternatives, including Mercedes’ own GLK, as well as the BMW X3.

There also are a number of alternatives in the entry-luxury segment, even if you focus solely on CUV offerings, such as the Lincoln MKC, the BMW X1 and the soon-to-arrive Lexus NX. But the Mercedes is likely to do well, if not dominate the fast-growing segment. It is attractive, well equipped and reasonably fun to drive, especially in AMG trim. And if it does as well as the maker has done with the CLA sedan, the biggest challenge could be finding the new GLA at your local Mercedes dealership.