Nothing prickly about the Citroen C4 Cactus Airflow 2L. 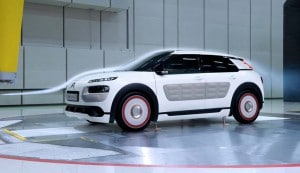 The Citroen C4 Cactus Airflow 2L is as large as a Ford Focus but lighter than a Mazda Miata.

It’s as big as a Ford Focus, lighter than a Mazda Miata, and can cut through the air nearly as efficiently as a jet. But what’s likely to stand out most about the new Citroen C4 Cactus Airflow concept is its fuel economy, an estimated 141 miles per gallon.

While that’s not quite up there with the 261 mpg Volkswagen XL1, or even the new 235 mpg Renault Eolab prototype, the new Citroen appears to be perhaps the most practical of the three models – though it remains to be seen if the French maker can actually bring the Cactus Airflow to production.

Set to debut at the upcoming Paris Motor Show, the full name of the new concept vehicle is the Citroen C4 Cactus Airflow 2L – the little fillip at the end is arguably the most significant detail, as it positions the latest Cactus concept as a so-called two-liter car. In other words, it burns that much fuel to go 100 kilometers. For metrically challenged Americans, think of going more than 70 miles on barely a half gallon of gas.

To get there isn’t easy, of course – at least not for Citroen designers and engineers.

We got a first look at the original Citroen Cactus Adventure Concept at the Paris Motor Show last winter at the Geneva Motor Show. From a first glance, the most immediately striking feature of the show car is the use of so-called “Airbumps.” Think of a ruggedized version of those air-filled packaging strips, but here designed to fend off the normal dings and dents we have all experienced in parking lots. 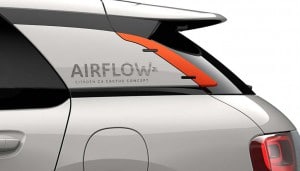 The Airflow is powered by a pneumatic hybrid.

A closer inspection revealed that this Focus-sized French creation used an assortment of lightweight materials in a highly aerodynamic package. There’s a carbon fiber floor, roof, tailgate and doors, while aluminum is the material of choice for structural components, as well as the hood.

(Click Here for a closer look at the Renault Eolab, a 235 mpg concept vehicle.)

In the latest iteration, the Cactus Airflow loses even more weight, coming in at barely 2,100 pounds. To put that into perspective, that’s about 350 pounds lighter than the current Mazda Miata, and 200 under the new 2016 MX-5 that will have benefited from Mazda’s aggressive SkyActiv lightweighting program.

(The original C4 was about 440 pounds lighter than the production Citroen C4, and the new model trims mass by another 220 pounds.)

Citroen claims it has reduced aerodynamic drag by another 20% thanks to the use of passive and active aero elements, including air curtains and active shutters that can clean up airflow around the show car’s narrow, 19-inch wheels – usually one of the “dirtiest” places of a vehicle from an aerodynamic perspective – and deflectors that channel air around the vehicle’s body.

Side mirrors also give way to more windswept cameras, a familiar design theme that appears to be finally gaining traction with both automakers and automotive regulators.

The Cactus Airflow adopts a new pneumatic hybrid powertrain it calls Hybrid Air. Like a more conventional gas-electric model, it recaptures energy normally wasted during braking and coasting, but here it stores that power in a compressed air tank paired to the driveline along with a 3-cylinder PureTech engine.

The gas side of the powertrain also was put on a diet, adopting both lighter components and a diamond-like coating to reduce the friction that normally robs about 20% of the power an engine produces.

As with the Renault Eolab, this French concept isn’t scheduled to go into production, but Citron is suggesting that a number of the basic concepts it’s demonstrating on the C4 Cactus Airflow 2L could be adapted to production models in the not-too-distant future.