Vehicle will be capable of driving itself on highways. 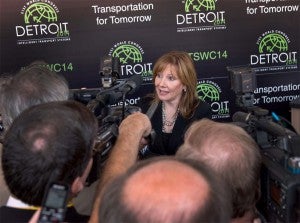 Mary Barra meets with reporters at the opening of the annual ITS conference in Detroit.

Hoping to steal a march on its competition, General Motors CEO Mary Barra has announced plans to produce an all but fully autonomous Cadillac model in 2017, while also introducing new features that will allow Caddy vehicles to “talk” to other cars and to a highway infrastructure system.

While Barra did not specifically name which vehicle will get the new Super Cruise system, it is expected to appear in the all-new flagship sedan Cadillac is planning to launch for 2017. It would not only allow a driver to take their foot off the gas – as with the most advanced Active Cruise Control systems now on the road – but also take their hands off the wheel.

And Super Cruise could position GM as one of the leaders in the fast-emerging field of autonomous driving. Other manufacturers, notably including Nissan, as well as Ford, Mercedes-Benz and Toyota, are working on various forms of self-driving vehicles, as well. And tech giant Google is planning to launch a fleet of autonomous vehicle prototypes over the coming year using technology the maker hopes to license to the auto industry.

Separately, the federal government recently announced it will push to develop a national connected-car network that would allow vehicles to talk to each other and a highway infrastructure – alerting one another to traffic or weather problems, for example. The Michigan Department of Transportation on Sunday said it will partner with GM, Ford and the University of Michigan to put in place a vehicle-to-infrastructure, or V2I, system covering 120 miles of highways around Detroit. 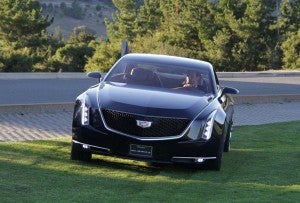 The Cadillac Elmiraj concept is expected to have a strong influence on the new flagship, though it will go with a sedan body style.

“No other suite of technologies offers so much potential for good and it’s time to turn potential into reality,” Barra told reporters as she announced plans for Cadillac’s autonomous vehicle program at the opening of the annual Intelligent Transportation System, or ITS, conference in Detroit.

GM plans to use Cadillac as its lead in bringing the technology to market. And Barra explained that at least two GM models will adopt new smart-car technologies in 2017.

That includes an updated version of the mid-range CTS sedan that will feature V2I capability. That would allow the vehicle to receive instant alerts about traffic tie-ups or other issues on roads equipped with the technology, while also communicating directly with other vehicles – a system known as V2V.

The more advanced system would use a variety of onboard sensors, likely including radar, cameras and possibly even an advanced laser device known as LIDAR, to allow it to drive at full speeds on highways, even in stop-and-go situations. Such technologies, Barra said in a statement, “will ultimately enhance safety.”

The new Super Cruise system will not allow the new Cadillac model to operate fully autonomously. A driver would have to remain in the ready position to take control if the system had problems. And it would be capable of operating in self-driving mode only on limited access roads where situations are more easily limited. Intelligent vehicle proponents, gathering in Detroit this week, say the challenge of operating on local roads becomes far more complex, even at lower speeds.

But there is a broad push to deliver autonomous vehicles within the next decade. Mercedes already offers many basic elements of that in its newest version of the big S-Class sedan. Nissan has promised to put a fully autonomous vehicle on the road by 2020. And CEO Carlos Ghosn recently said elements of that technology will begin showing up in vehicles sold by Nissan and its upscale Infiniti brand before the end of the decade.

“We’re not going to wait until we perfect a driverless system,” noted Jon Lauckner, GM chief technology officer. “So we’re going to take a leadership position on saying it’s time to get going on the deployment of V-to-V technology.”