The Golden State rolls out new regs for autonomous vehicles. 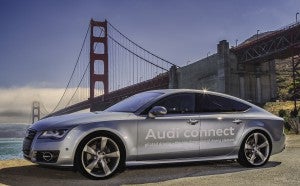 California’s fabled automotive culture passed another milestone today as the state’s new law governing autonomous driving went into effect, leaving the road open to pilotless cars though they aren’t expected to turn up on the 405, the Pacific Coast Highway or the Golden Gate Bridge anytime soon.

Audi, the ever-eager German carmaker, is the first company to receive an autonomous driving permit issued by California. The maker has conducted research over tens of thousands of miles in Europe and various U.S. states, where such testing is permitted.

The research is aimed at preparing a highly automated piloted driving system for freeway traffic conditions. Audi envisions this technology could be ready for consumer introduction within five years.

While California isn’t the only state with these types of laws – Nevada, Florida and Michigan also have already adopted similar regulations – its roads are important because the state is home to the brand’s Electronics Research Lab (ERL).

Engineers from the ERL are working on a wide range of automated driving issues, including human-machine interface prompts that indicate when a human or the vehicle is driving. They’ve been involved in the development of these systems for some time.

Audi, ERL and Stanford University engineers collaborated on the development of the Autonomous Audi TTS Pikes Peak car, which successfully completed the challenging 12.42-mile route of the Pikes Peak International Hill Climb race in Colorado in 27 minutes without a human in the car.

“Audi is a driving force behind the research taking automated driving from science fiction to pre-production readiness,” said Scott Keogh, president, Audi of America. “Obtaining the first permit issued by the State of California shows that we intend to remain the leader in this vital technology frontier.”

California has allowed limited use of its roads for automated vehicle testing in recent years, but the laws approved by the state legislature today were established in 2012 by Gov. Jerry Brown.

Regulations taking effect today include: proof of insurance or surety bonds for manufacturers testing automated driving research cars and permits for company-designated operators of those vehicles.

In 2012, Audi was the first automotive OEM to receive one of the red autonomous vehicle license plates issued by the State of Nevada. In July, it was the first to demonstrate the capability of its automated driving technologies on a Tampa expressway newly designated as an autonomous and connected car test bed.