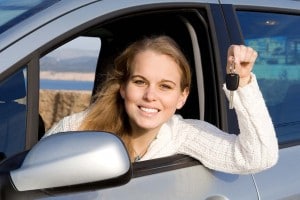 Women, according to a new survey, enjoy haggling over the price of a new car more than men.

The stereotype of a woman being unwilling to haggle with a dealership salesperson thus relying on her husband or some other man to handle the negotiations is going by the wayside.

The comfort level of women when it comes to rolling up their sleeves and getting the best deal on a new car is rising, according to a recent survey by Swapalease.com. In fact, women are more likely than men to duke it out: 33.3% of women said “it makes it a fun process” compared with just 25.1% of men.

Morn Cremeens, who recently picked up a 2014 Ram Laramie Longhorn pickup with the RamBox Cargo Management System, said much of her negotiating was done before walking in the door to the dealership via email. That said, once on site, the price came down some more.

Cremeens, who lives in Chesterfield, Michigan, a Detroit suburb, added the salesperson was ready to deal some more because she was a serious buyer and “ready to close right away since I had my corporate check book with me.”

Additionally, 22.7% of men say they “have learned to do it, but really don’t like it” compared with 17.5% of women. While men like the process less than women, they have higher expectations when it comes to wheelin’ and dealin’.

Interestingly, though, 22.4% of women also said they try to first focus on the monthly payment, compared to just 8.9% of men. Consumer negotiation experts largely advise to negotiate on the total price of the vehicle, not the monthly payment.

(Voice recognition is No. 1 problem for new car buyers. For more, Click Here.)

The effort to get more money knocked off the price may have a more positive impact on men than women when it comes to how they felt about the deal. Nearly 32% of men said they “feel like the dealer will always win,” however, 36.8% of women felt that way and the same number of women also said they’re “not sure what a good/fair price should be.”

(Click Here for details about the impact overseas markets will have on Mustang sales.)

The majority of both men (60.6%) and women (53.5%) said they like to have lots of information that they have researched beforehand: a concept Cremeens supported. She’d driven the test driven the truck previously and prior to that checked it out at the North American International Auto Show in Detroit.

(To see is GM is playing a shell game with its recent production plans, Click Here.)

“The key is spending time in the research up front before you are ready to pull the trigger,” she said, adding, “nowadays with the Internet and email it saves a bunch of time.”