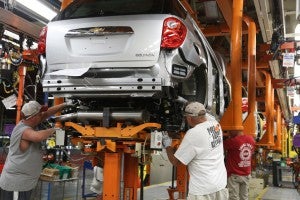 GM is moving Cadillac SRX production to Spring Hill, Tennessee from Mexico. It failed to mention it's shifting Equinox production from Spring Hill to Mexico.

In the game, a small ball is place under one of three cups which are then quickly shuffled around. For a few bucks, someone is invited to guess what cup the ball is under; however, it seems GM may be playing the same game with vehicle production moving to the U.S.

With some fanfare, the Detroit-based maker on Wednesday announced it was moving production of its Cadillac SRX crossover from its plant in Ramos Arizpe, Mexico, to the former Saturn plant in Spring Hill, Tennessee.

However, what the company failed to tell folks is that it is moving the U.S. production run of the Equinox from Spring Hill to, um, Mexico. In fact to the same Ramos Arizpe plant where the SRX came from, according to Reuters.

GM has not yet commented on the move, but it begs the question: is Spring Hill coming out ahead in the swap? It’s difficult to say because hard numbers for how may Equinoxes are produced in Spring Hill varies based on demand.

Currently, the Tennessee plant supplements Equinox production when demand outstrips the capability of the two Canadian plants responsible for the vehicle. Spring Hill has been fairly busy when it comes to the small SUV.

Through July sales were up just under 1%, but boomed in July with a 36.8% leap, and the company is optimistic about the vehicle. Steve Majoros, marketing director, Chevrolet, predicted “2014 should see the third straight year of sales above 200,000.”

SRX sales last year were less than a quarter of Equinox sales with 56,776 crossovers sold. However, the Spring Hill plant is supposed to get two midsize crossover/sport-utility vehicles by 2015, according to the automaker, so whatever vehicle comes next – speculation centers on the GMC Acadia – will determine the equitability of the switch.

(Click Here for details on the No. 1 problem for new cars: voice recognition.)

The maker said it was investing an additional $185 million into the facility, which it promised the UAW it would keep open when it deep-sixed the Saturn brand, to produce several variants of the maker’s greener Ecotec engine. There are 11 versions of the 3-cylinder and 4-cylinder engines that will be used in all five GM brands produced in six plants around the country.

(To see more about the expected strong sales of the new Mustang, Click Here.)