Ford warning some customers may have to wait for new pickup. 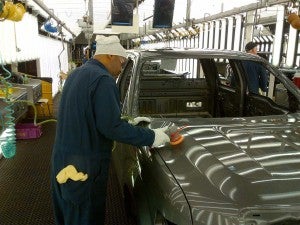 A line worker at the Dearborn Truck Plant polishes paint on the old F-150 pickup.

Ford has crossed the point of no return. But it will be months before it knows if one of the biggest risks in the company’s history will pay off.

Over the weekend, the maker produced the last of its steel-bodied F-150 pickups at its historic Dearborn Truck Plant, crews quickly moving to tear up the line. When they’re done with the costly conversion, the factory will begin producing an all-new aluminum-bodied version of the F-150 that analysts say will either become an industry benchmark or one of the biggest disasters in Ford history.

The changeover will take about a month, and cost $359 million. Ford is making a similar investment at its truck plant in Kansas City, Missouri, which also will produce the new 2015 F-150. The Kansas City plant will continue producing the old 2014 model through year-end, Ford telling dealers and potential customers it plans to take its time with the changeover to ensure it meets tough quality expectations for the new truck.

And expectations are clearly high, driven by the hype and hoopla that has been building ever since Ford showed a prototype of the new pickup, dubbed the Atlas, at the 2013 Detroit Motor Show. It followed a year later by revealing the actual production model at the show this past January.

Ford is by no means the only automaker investing in aluminum as a replacement for steel. British-based Jaguar Land Rover now has used the lightweight material on a number of its cars and trucks, as has Audi. Indeed, the hood of the old Ford was made of aluminum. But Ford is taking a giant leap – and a risky one, analysts warn – going to an “aluminum-intensive” body for its highest-volume and highest-profit truck.

At its peak, the F-Series – which includes heavy duty models not yet switching to aluminum — generated about 1 million units of volume annually. That fell off dramatically during the Great Recession, but demand has been rising sharply as the nation’s economy recovers. Even as Ford winds down the old model – a time when sales typical slack off – the F-Series delivered a 5% year-over-year gain for July, at 63,240 trucks sold.

Truck buyers tend to be loyal, something that Ford believes it can count on to maintain that momentum – but they are also demanding and, in many ways, risk-averse. Most of the “urban cowboy” market of decades past has dried up, and those who buy full-size pickups today aren’t in the fashion market. They want something that they can count on to work every time they turn the key.

Ford is making a number of changes under the hood, including the addition of a second turbocharged EcoBoost engine it promises will yield significant fuel economy improvements. But that’s not where the real concern lies. What buyers worry about most is the durability and reliability of the new aluminum body, as well as the costs and possible challenges of undergoing repairs.

Ford, for its part, Ford has repeatedly assured customers that it has extensively tested the aluminum alloys it will use, claiming the new truck will be more ding and dent-resistant. It also plans to have its dealer network trained and ready to repair the new truck as easily as the old steel-bodied one.

But first, it must complete the changeover of its truck plants, starting with Dearborn. The factory itself is relatively new, though built on the foundations of the old Rouge assembly complex that was a triumph of manufacturing prowess for company founder Henry Ford. In its heyday, between the World Wars, the company liked to brag that it took iron ore, sand other raw materials in at one end, and rolled out finished vehicles at the other.

The factory was completely rebuilt a dozen years ago, Henry Ford’s grandson and then-CEO Bill Ford Jr. turning it into an environmental showcase with, among other things, a “living” roof whose various plant species help reduce heating and cooling needs.

The maker is trumpeting the environmental benefits of the new F-150 which will weigh in as much as 700 pounds lighter than the old truck – and which, by engineering rule of thumb, could yield as much as 7 mpg better mileage once Ford gets it official certification from the EPA.

Ford is attacking the factory changeover with military precision. “We have a truck-by-truck, minute-by-minute, plan,” Bruce Hettle, the head of North American manufacturing, told The Detroit Free Press, adding that, “We are doing things we have never done before” to ensure there aren’t any glitches.

Nonetheless, Ford is cautioning dealers that it won’t try to rush the pace once Dearborn, and later, Kansas City both come on line. That might mean some modest delays in deliveries to some customers, especially large fleet buyers, as well as those looking for extensively customized trucks.

“We understand the desire to get the customer units as quickly as possible,” Ford is telling dealers in a letter,” but do not want to compromise our commitment to quality for the sake of a few additional weeks of delivery.”

(Chevy hopes buyers will rally around new Silverado Rally models. Click Here to check them out.)

Considering the risks, analysts generally agree that caution is the right watchword. Flooding the market at the expense of quality would ultimately cost Ford in the long-run. Domestic rivals General Motors and Chrysler would love nothing more than a major lapse in the launch of the new F-150, as would Nissan which will reveal its own redesigned Titan full-size pickup at the 2015 Detroit Auto Show.

On the other hand, delivering a high-mileage, high-quality truck that meets consumer expectations for reliability and low operating costs could cement Ford’s leadership of the full-size truck segment for years to come.