Lighter roadster will have an Alfa Romeo sibling. 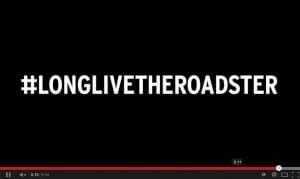 Mazda is teasing the launch of the fourth-generation MX-5 Miata roadster scheduled for September.

When it first debuted, a quarter century ago, the original Mazda Miata was hailed by one critic as “the best British sports car the Japanese have ever built.” And over the years, Mazda has continued to refine the MX-5 while largely sticking to its original formula of light weight, low cost, dynamic handling, and an easy-to-open convertible top.

But what to do for a follow-up? That’s the question we’ll finally have answered when, on September 3rd, the Hiroshima-based automaker finally plans to reveal the next-generation Miata at an “exclusive event” in Monterey, California, just before a big MX-5 race at the speedway that bears the Mazda name.

How much of a change we’re in for with the fourth-generation 2-seater is unclear. The original Miata helped demonstrate the potential of the roadster market, something many analysts had written off for dead. That spurred a flood of followers, such as the Audi TT, Porsche Boxster, Mercedes-Benz SLK and BMW Z4. Over the years, those German offerings have gotten slicker, faster and a lot more expensive. But other than the addition of an optional folding hardtop, the Miata has stayed true to its roots.

But the new Miata starts out quite differently, at least in one aspect. Where the original was sole sourced within the Mazda design and engineering studios, the 2016 MX-5 will be the result of an unusual joint venture pairing the Japanese maker and Italy’s Alfa Romeo. How much input the Fiat Chrysler Automobiles subsidiary will have had likely won’t become apparent until that exclusive preview two months from today. 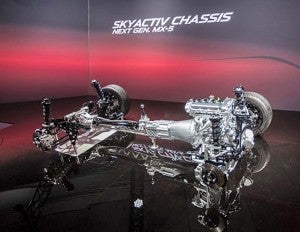 Mazda unveiled the Skyactiv chassis for the new Miata roadster at the NY Auto Show in April.

“We’re excited to make this official, to announce that the newest member of the MX-5 Miata family will be arriving soon,” said Jim O’Sullivan, president and CEO, Mazda North American Operations (MNAO). “Along with our colleagues around the world, we continue to celebrate the MX-5’s 25th anniversary and look forward to sharing even more news in the near future.”

What we do know of the joint venture is that Mazda is taking lead on the program, but with Alfa offering a lot of input and, we assume, at least some engineering resources. Both makers promise that the final product – make that products – will be clearly differentiated by brand. This won’t be a repeat of the joint venture, they claim, that resulted in the all but identical Subaru BRZ and Scion FR-S models, where you need to check out the badges to see which is which.

(Ambitious Alfa has big plans as it launches US comeback. Click Here for the inside story.)

Alfa officials reconfirmed their commitment to the project during a day-long Fiat Chrysler summit on May 6, revealing the new model will be one of a wide range of new products, all the way up to large utility vehicles, set to come to market by 2018 as part of a $7 billion investment program. Significantly, FCA CEO Sergio Marchionne has said the roadster will be the only Alfa model produced outside Italy.

(Click Here for a first look at the new Ford Focus ST.)

While Mazda has offered nary the slightest teaser image of the new Mazda’s exterior design, it did reveal the roadster’s new Skyactiv platform during a news conference at the New York Auto Show in April, noting that the next MX-5 will be a full 220 pounds lighter than the existing car – which has gained several 100 pounds over the years, in part due to federal safety regulations as well as the addition of such niceties as its current infotainment system.

By likely shifting to the latest high-strength steels, industry observers also expect the next Mazda Miata will be a fair bit stiffer than the outgoing model.

(At 707 hp, the new Challenger Hellcat will be the most powerful muscle car ever built, boasts Dodge. Click Here to check it out.)

Those invited to attend the Monterey event won’t be the only ones to get a first look at the 2016 Miata. The maker plans to stage simultaneous events in Spain and Japan, as well. When the new Miata will actually reach showrooms is yet to be disclosed, but the early unveiling suggests Mazda likely won’t wait until the normal start of the 2016 model-year but just might have something available by spring of next year, in time for the al fresco driving season.