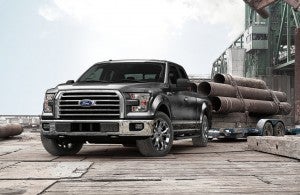 Ford is making the 2015 F-150 lighter everywhere, including the owner's bank account. The new model is going to be more expensive than its predecessor.

While Ford’s new “aluminum-intensive” 2015 F-150 pickup will be going on a diet, it’s going to be heavier on the wallet, the new truck’s sticker price jumping by as much as $3,615, depending on the specific model.

But the Detroit maker is hoping that potential buyers still see the 2015 Ford F-150 as a bargain because of the anticipated fuel savings that will come with shaving as much as 732 pounds off the big truck’s mass. On average, the new pickups will come in about 625 pounds under the weight of the steel-bodied 2014 F-150 line.

Ford is also defending the increase by noting it is adding significantly more content to the 2015 remake of America’s best-selling vehicle. There are new LED accent lamps, larger video screens, and other new features on most of the models. And top-line versions, such as the F-150 Platinum and King Ranch edition, get a level of standard equipment more normally associated with luxury cars than work trucks.

Ford has more than enough riding on the new F-150 to test its payload capacity. The truck has spent three decades at the top of the automotive sales charts, leading as both the top truck and the best-selling passenger vehicle overall. But it is risking the possibility of alienating buyers by migrating from a traditional steel body to one made almost entirely of lightweight aluminum.

Since officially unveiling the 2015 F-150 at the Detroit Auto Show last January, the maker has gone to extremes to overcome concerns about the switch, notably about the ruggedness and durability of using aluminum for a vehicle that traditionally faces some challenging, real-world applications.

But it has also played up the pluses. While Ford has yet to release official EPA-rated fuel economy numbers, industry analysts note that, by general rule of thumb, a vehicle gains about 1 mpg for every 100 pounds of mass it sheds. That would suggest the new F-150 could, in some configurations, see a gain of as much as 7 miles per gallon.

That will depend, in part, on other factors, such as powertrain choices. And, in fact, Ford is using the opportunity to offer a mileage-miser package that will rely on a new naturally aspirated 3.5-liter V-6 to replace the old 3.7-liter package. The smaller engine will deliver 283 horsepower and 255 pound-feet of torque. But thanks to the lighter weight of the F-150, it should match the capabilities of the old 3.7-liter V-6.

Meanwhile, Ford also will be adding a 2.7-liter EcoBoost engine, from a displacement standpoint, the smallest Ford has used in an F-150. By using a turbo package, that could contribute to additional fuel economy gains. But Ford also says the smaller EcoBoost motor will maintain a significant amount of cargo and towing capacity with the smaller motor still turning out a maximum 325-hp and 375 lb-ft of torque.

It remains to be seen how Ford will handle the ratings for some of its other powertrain packages, but officials have hinted they will be looking to deliver even more capabilities – such as towing and payload – while reducing fuel consumption.

Ford has kept the price hikes to a minimum on its base models, the XL and XLT climbing a modest $395 for 2015, to $26,615 and $31,890 respectively. Those two packages account for as much as 70% of sales in a typical year. Among other things, they will get new information screens and a better audio system.

(Click Here to get details on Ford’s 1.3 billion 2Q profit.)

The mid-range Lariat, meanwhile, jumps $895, to $31,890 – all prices excluding destination charges. For the money, the F-150 Lariat will get heated and cooled front seats and LED lighting in its cargo box.

(To read why the U.S. car market isn’t slowing down, Click Here.)

The big hikes come at the luxury end, the King Ranch rising $3,615, to $49,460, and the Platinum adding $3,055, to come in for 2015 at $52,155. Among other things, these models will get new LED headlamps and taillights, an 8-inch information screen, cargo box lights, side mirror spotlights, remote tailgate release and power lock, twin 400-watt power outlets, push-button start, heated rear seats and a heated steering wheel.

They’ll also get new safety systems, including blind-spot detection. The Platinum, in particular, will introduce to the F-150 line Ford’s rear-seat inflatable safety belt, a technology already available on several models, including the Explorer.