No plans for U.S. market; another BMW-fighter in development. 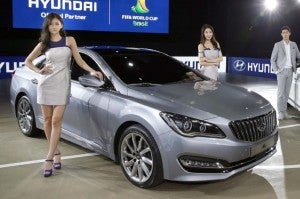 The new Hyundai AG is based on the maker's more mainstream Grandeur/Azera model.

Increasingly intent on becoming a player in the luxury car market, Hyundai has pulled the wraps off a new large car, codenamed AG, designed to take on high-line competitors such as BMW and Audi.

The Korean carmaker has already pushed into the luxury market with the flagship Equus and mid-range Genesis – the latter newly updated for 2015. But senior company officials have confirmed plans to expand their line-up of upmarket offerings.

The new sedan making its debut at the Busan Motor Show, however, is targeted specifically at the Korean luxury market which has seen a surge in growth among imports like BMW, Audi and Mercedes.  Codenamed the AG, the new Hyundai offering is not expected to be shipped to the U.S. Other new luxury offerings are under development for export, sources with the maker told TheDetroitBureau.com.

The AG will be slotted between the Genesis and the more mainstream Hyundai Grandeur – the latter sold in the U.S. as the Azera, Kim Sang-dae, a Hyundai domestic sales executive, told reporters in a preview ahead of the opening of the Busan show.  “There is a big price gap between Grandeur and Genesis,” he explained, which has “spurred many customers to shift to imported cars. We want to narrow the gap with the AG.”

(Click Here to find out how Hyundai-Kia toppled Honda as the “greenest” automaker in the U.S. market.)

The new AG will be priced around 45 million Korean won, or $44,000, when it reaches Korean showrooms later this year.  Analysts caution that the maker could have a hard time differentiating the sedan from the current Grandeur model. But they also say Hyundai has to get out in front of shifting market trends.

Long closed to imports, Korea has opened up its automotive market by sharply reducing import tariffs. By 2016, foreign makers, mainstream and luxury, are expected to more than double their market share, to around 20%. But the high-line segments have seen particularly strong growth since duties on such European brands as Mercedes and BMW were reduced in 2011.

Competition from those luxury brands was a major reason, analysts say, why Hyundai saw its sales in the home market decline for two years in a row. Demand has been particularly strong in the emerging Korean diesel segment, and along with the front-wheel-drive AG, the maker is also launching a diesel version of the Grandeur.

“Our high-end customers seeking to move up from the Grandeur sedan started to turn to imported brands,” Kim Sang Dae, director at Hyundai Motor’s domestic marketing group, told the Bloomberg news service in an interview.

As TheDetroitBureau.com previously reported, Hyundai hopes to cover a much broader product range than the traditional mainstream manufacturer. Senior officials have repeatedly stressed they will not abandon the low-end segments where products such as the Accent and Elantra are strong players.  It is “committed to invest in all of our existing vehicles,” explained Hyundai Motor America’s new CEO Dave Zuchowski, during an April interview.

That said, the maker wants to expand its luxury options, particularly in key global markets such as the U.S. It has already launched several, including the Genesis Coupe and newly redesigned Genesis Sedan, as well as the premium luxury Equus.

Hyundai is counting heavily on the 2015 Genesis which, said Zuchowski, “is our halo vehicle.  It elevates our brand and says we can compete with the best in the world.”

The maker has been looking at a variety of other upscale options, he noted, including a possible premium SUV. For now, that idea has been shelved because it might cannibalize the existing Hyundai Santa Fe line.

That said, Zuchowski did reveal that the Korean carmaker does have a few more high-line products under consideration.  “The space that seems to hold the most potential for us is the BMW 3-Series space,” he said, adding that, “We’re looking at it closely.”

How soon it might reach market, the HMA executive wasn’t disclosing, but other sources say it could make its debut within the next 12 to 24 months.