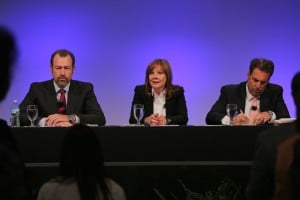 Faulted for a combination of “incompetence and neglect,” General Motors took a serious hit as the results of an independent investigation into its handling of a fatal safety defect were released Thursday – but GM CEO Mary Barra won praise for her efforts to be both transparent about those problems while pushing for much-needed changes within the carmaker’s flawed culture.

The report, prepared by former federal prosecutor Anton Valaskus, found that GM could have done a far better job of dealing with a defective ignition switch now linked to at least 13 deaths. The probe has already led to the dismissal of 15 GM employees – most of them senior managers or executives — while five others have been disciplined.

In a blunt address to 1,200 company workers at GM’s Renaissance Center headquarters in Detroit, Barra clearly tried to balance her message to address a variety of different constituencies. She expressed, “my deepest sympathies to the families that lost loved ones and to those who were injured,” while also presenting a blunt, corporate mea culpa, noting that the handling of the ignition switch problem was “riddled with failures, which led to tragic results.” 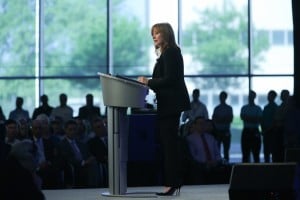 Mary Barra spoke to more than 1,000 GM employees about what the company will do in the wake of its internal investigation.

But Barra didn’t tell her employees that they should all collectively fall on their swords, noted Greg Smith, a consultant with Portland, Maine-based VIA Agency, which has worked with a number of automakers on corporate image problems. Barra, he says, made sure that GM workers came away feeling that they should and could do a better job, and that management will stand behind them, even if it means blowing the whistle on managers who took shortcuts on safety.

The new chief executive was “poised and decisive,” said Smith. “She exhibited real leadership here, addressing both her internal and external constituents.”

“Transparency” has been a key point for Barra since the crisis began with word of the first ignition switch recall in mid-February. The maker has repeatedly expanded that service action since then to cover 2.6 million vehicles, but GM has also launched more than two dozen additional recalls since then, collectively totaling about 15 million cars, trucks and crossovers. And Barra Thursday suggested more recalls are likely in the near-term.

“They had to take corrective action” to prove that her promise to come clean wasn’t just meaningless words, said Don Tanner, a principal with Detroit’s Tanner Friedman, another firm specializing in corporate image issues. “I think (Barra) took an important step today,” following up on earlier promises “that they would be taking corrective action.”

The first woman to serve as CEO of a major automaker, Barra has been in the spotlight since the unexpectedly early retirement of her predecessor, Dan Akerson, late last year. She won initially strong praise but took a drubbing during April hearings on Capitol Hill looking into the ignition switch problem.

(Pattern of “incompetence and neglect” led to recall. For more, Click Here.)

For Barra, the Valukas report came as personal vindication, concluding she did not know about the problem during her prior job as GM’s global product development chief. But, ultimately, she has to make sure that GM itself can find the light at the end of the tunnel. To that effect, frequent critic, Massachusetts Senator Ed Markey was cautiously optimistic.

(Click Here for details about GM firing 15 employees due to recall.)

“This report reveals GM recognizes it must take the difficult but important initial steps to clean up a culture of ineptitude.” The Democrat said in a statement. “But we need more than an accounting of past mistakes; we need to ensure accountability and that permanent measures are put in place to prevent future deaths.”

Simply responding to the Valukas report doesn’t mean the worst is over for either Barra or GM, observers stress. There are still investigations underway by both houses of Congress, by the Securities and Exchange Commission, and by the U.S. Justice Department. Plus, GM will soon, and quite literally, put its money where its corporate mouth is. It has hired Ken Feinberg, who oversaw the 9/11 and BP oil spill compensation funds to handle one GM is setting up for the ignition switch victims.

(To see more about the results of GM’s internal investigation, Click Here.)

“There is still much work to be done,” Lance Cooper, an attorney who has been working with some of those victims, said in a statement.

And Barra will have to continue showing an ability to manage the crisis and balance the needs of her various constituencies.