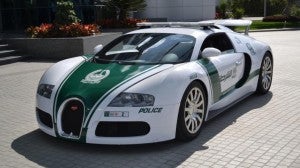 The Dubai Police Department recently added a new $1.6 million Bugatti Veyron to its fleet of supercars.

The initial thought upon hearing that the Dubai police force adding a $1.6 million Bugatti Veyron to its fleet is, “Guess there are no speeders there!”

The department recently added the supercar capable of going from stop to 60 mph in 2.5 seconds and tops out at nearly 270 mph to its fleet of supercars.

Yes…they have a fleet.

It’s not just cars in its $6 million “superfleet.” It also just added a Can Am Spyder and a 30-foot superboat, as well.

There is some good for the lead-footed in Dubai: they will never know the shame of being pulled over for attempting to break land-speed records on the roadways of there because the supercars are not used as part of their regular patrols: they’re public relations tools only. They drive the fleet to various tourist attractions in Dubai as a means of connecting with citizens and tourists.

The Dubai police department is not alone in its high-priced publicity efforts. Plenty of other departments around the world have supercars as part of their fleet and most are used to generate positive feelings about the department.

(Click Here for details about the high expectations for the new Lincoln MKC.)

Lamborghini has shown up in the lot of the Los Angeles Police Department. The Gallardo was donated to the department, which uses it to raise money at charity events. The Gallardo is used by the Italian state police. The department was given its first one in 2004 and received a second in 2008, although it wrecked one in 2009.

(To see the quirky remake of the BMW X6, Click Here.)

However, the Italian fleet is no longer limited to the Gallardo. Lamborghini has given the Italian state police a new Huracan to add to its fleet of patrol vehicles. The 610 horsepower two-seat coupe has a sticker price of around $250,000 and a top speed of 202 mph. The vehicles are actually used in active patrols, which makes sense in a place filled with supercars, as well as public relations events.